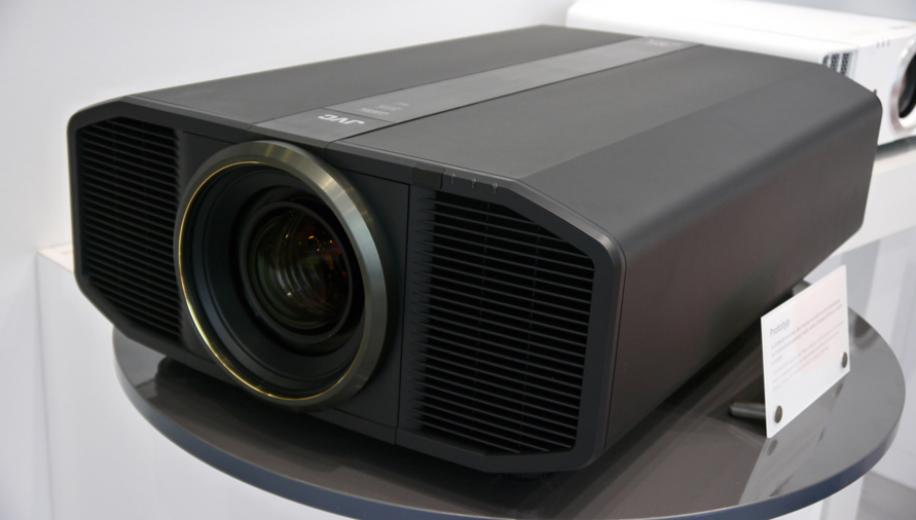 JVC DLA-Z1 Projector (2016)
SRP: £35,000.00
JVC surprised everyone when they recently announced their plans to launch a native 4K laser projector.
The company officially launched the DLA-Z1 at IFA and, whilst there, we got our first chance to see the new projector in action. Although the Z1 uses a chassis that appears to have a similar design to previous generations of JVC projectors, nothing can quite prepare you for its actual dimensions. If you look at the image below, we placed our iPhone 6 next to the projector to give you a sense of scale. Although the Z1 uses the same basic configuration, with a central lens, air intake and exhaust vents on either side and the connections at the rear, that’s where the similarities end. However despite its sheer size, JVC have done a great job of making this huge projector look exceptionally stylish. There is a centre line design that accentuates the 4K all-glass lens array, combined with a brushed aluminium finish that is designed to give the Z1 a touch of luxury. JVC have also tried to add some functional beauty by applying a textured matte black finish, thus minimising visible finger prints during installation as well to eliminate in-theatre reflections. Inside the lens ring there is a gold coloured ring to accentuate the lens and add a touch of luxury but otherwise the Z1 is all business.

In order to actually build the Z1, JVC first had to develop the world’s smallest native 4K D-ILA device, which measures 0.69 inches and has a resolution 4096 x 2160. To achieve this JVC narrowed the pixel gap by 31% compared to previous devices and they also decreased the amount of light scattering and light diffraction from the device. The result is a smooth and detailed picture that is free from any visible pixel structure even on large screens. Of course the new 4K D-ILA device is about the only thing on the Z1 that is smaller. The projector uses three of these new 4K D-ILA devices, one for each of the primary colours of red, green and blue, and supports 10-bit gradation. Aside from the native 4K resolution, the other big innovation on the Z1 is its laser light source can deliver 3,000 lumens of brightness and has a lifespan of over 20,000 hours. JVC’s proprietary Blu-Escent light source is a high efficiency blue laser diode that uses a motor-less inorganic phosphor and a large-sized heatsink and heatpipe. It also includes a dynamic light source control to deliver higher contrast images with JVC claiming a contrast ratio of infinity to one, although they would say what the actual on-off or ANSI contrast ratios were. The light output on a laser can be controlled instantly, which means that the brightness can be adjusted from scene to scene with any delays, which JVC claim can deliver an image that is close to human perception. The use of a laser light source also means that the Z1 can deliver a Wider Colour Gamut (WCG) with 100% of DCI-P3 and over 80% of Rec. 2020.

To accommodate the native 4K resolution of the Z1, JVC have also developed a new high resolution lens that measures 100mm in diameter compared the to the 65mm lens used on their previous projectors. The all-glass lens array is comprised of 18 pieces in 16 groups and has been designed to reduce stray light and has an optical f-number of f2.6. There is also a highly accurate lens positioning control circuit that allows for higher precision in recalling different lens memories. In addition there is an extended lens shift for greater flexibility in terms of installation, with a range that covers 100% vertical shift and 43% horizontal shift. Since the Z1 uses a laser that has dynamic light control, there is obviously no need for a dynamic iris but there is a manual iris control for adjusting the amount of light output to suit the content or environment.

The Z1 supports High Dynamic Range (HDR) and has a new dedicated HDR Picture Preset Mode with detailed HDR adjustments. The Z1 supports HDR10 and when the projector detects an HDR10 signal it automatically goes into the dedicated HDR mode. The Z1 also supports Hybrid Log Gamma which is expected to be the main HDR format for broadcast television. Unfortunately HLG doesn’t have the necessary metadata to allow the projector to automatically switch into the dedicated HDR mode, so that will have to be done manually. The Z1 also includes a number of new features designed to deliver optimal 4K image reproduction, including the latest generation of JVC’s Multiple Pixel Control (MPC) which has now be upgraded with a new algorithm optimised for the projector's native 4K resolution. There’s also the latest version of JVC’s Clear Motion Drive (CMD) frame interpolation function with new motion enhancement features. The Z1 is the first native 4K projector to be certified as a THX 4K Display and as ISFccc, with a full suite of calibration controls and an auto calibration function. Other useful functions include a low latency mode to reduce input lag, ten different installation modes and USB firmware updates.

For the purposes of demonstrating the Z1, JVC had created a full home cinema with a 5.1.4-channel Dolby Atmos setup that used a Denon AVR-X7200WA for decoding an amplification. The room was completely blacked out, there was a projector screen with a 2.35:1 aspect ratio and a Panasonic DMP-UB900 Ultra HD Blu-ray player that was used as a source for some of the content. The rest of the content was coming from a dedicated drive and the demonstration started with a promotional video for the Z1. To demonstrate the projector’s ability to handle Hybrid Log Gamma (HLG), JVC showed some specially created content. This native 4K clip used an aspect ratio of 2.35:1 and was not only encoded using HLG but also at 10-bit and using the Rec. 2020 colour gamut as a container. The footage was travelogue in nature and the first thing that was apparent was the level of detail that this native 4K projector could deliver. There was no evidence of any banding, the colours looked natural and the image was bright, easily the brightest HDR presentation we have seen from a domestic projector.

At the end of the clip there was footage of a firework display and the projector did an excellent job of resolving the detail and colour in the exploding fireworks. Since this is a projector the peak highlights are never going to match an HDR TV but the image wasn’t as dark as the HDR we have seen on some projectors. However this improved performance with both overall and peak brightness did seem to come at the expense of the black levels which, whilst good, weren’t quite as deep as we’ve come to expect from a JVC projector. We suspect that in these HDR demonstrations JVC were deliberately pushing up the black floor to ensure that the images had the right amount of impact but they also haven't finished fine-tuning the HDR mode yet. The second demonstration was the Ultra HD Blu-ray of Lucy which used a 4K digital intermediate (much of the film was shot at a resolution of 6.5K) and was graded in HDR10. The projector immediately detected the HDR10 signal and switched into the correct picture mode. Once again the level of detail was immediately apparent with every pore on Scarlett Johansson’s face being evident and every wrinkle and mole on Morgan Freeman’s face being very clearly defined. The brightness and black levels looked good, although there was a hint of crush to some parts of the image, but overall the images looked superb and, aside from our recent experiences with Dolby Cinema, we'd say it was the best example of projected HDR we had seen. Although the highlights didn't have the same impact as the film seen on an Ultra HD TV, which we had quite recently, the colour saturation was certainly impressive.

The final demonstration used the freeway fight scene from Deadpool, a sequence that we are extremely familiar with, and again the Z1 delivered a fantastic looking picture that retained every pixel of detail and wonderfully realised colours. There wasn't a hint of banding and the motion handling was exceptional. As with Lucy the brightness of the HDR presentation was much improved, although was was still a hint of crush in some shots and the clouds weren't quite as well defined as we have seen when watching this Ultra HD Blu-ray on a good HDR TV. However as with all the other demonstrations it clearly showed that the increased brightness of laser, it's wider colour gamut and greater controllability certainly makes for a superior projected HDR experience, whilst the native 4K resolution means the Z1 can take full advantage of the best Ultra HD Blu-rays.

JVC were keen to point out that the projector we were watching was a prototype and that there was still some fine tuning to be done before the Z1 is actually released in mid to late November. However based on our experiences it will undoubtedly be the best projector the company has ever produced, but naturally that level of performance comes at a price and the DLA-Z1 will set you back an eye-watering £30,000.

AVForums were invited along to the UK launch event of the DLA-Z1 held at the Mercedes Benz World in Weybridge. We were given the same demonstration as that shown at IFA but this time on a 240-inch screen. The projector is confirmed to be available to buy at the turn of the year and we are hoping for a review sample of the finished projector around the same time. In the meantime here is UK product manager Mike Edwards answering questions about the DLA-Z1 at the event.