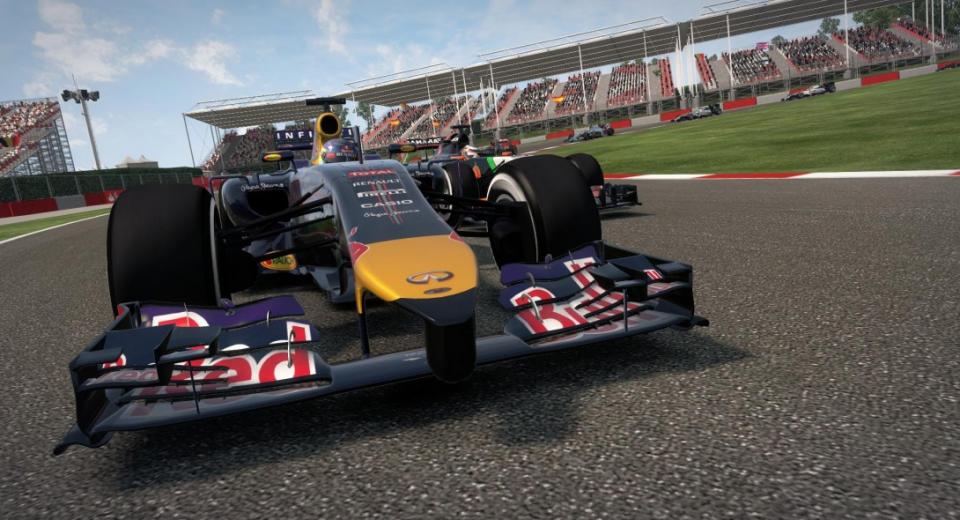 F1 2014 is being lauded as the series’ ‘most accessible game yet’, but what exactly does that mean? I’ve been given some time to play the game recently, and it seems Codemasters claim is one that will ring true.

The 2014 season has seen some of the largest regulations changes in the history of F1, and Codemasters have successfully adapted the cars to represent this change. The most controversial change is the most noticeable in game, the new V6 turbocharged hybrid engines whimper, rather than scream like their 2013 V8 counterparts.

Driver and race options are up to their ridiculously detailed standards once again, though. The depth of the alterations you can make represent an opportunity for the more hardcore racing fans out there to tweak and play around with their car during a weekend, making sure they get the best possible performance. One feature that I found gone with the introduction of new regulations was the changing of gear ratios. In the real world, the changing of gear ratios is now limited to just once per race, yet it has entirely gone from the F1 2014. However, aerodynamics, braking, balance, suspension, engine and camber alignments can all be adjusted once you’re in the garage, showing that Codemasters are doing their best to keep up with the ever changing world of Formula One racing.

The most accessible F1 game yet?


Of course with accessibility being the name of the game, these features aren’t compulsory. Some easier to understand car tweaks are available and the ‘flashback’ system returns. All are able to be turned off or on depending on your preferences, and it seems that Codemasters are hoping to double-dip with their audience. The game feels like it wants to appeal to both the racing simulation demographic as well as the casual racers out there and for the most part, it’s achieving that.

I was saddened to see that the damage system in the game has remained the same. From what I experienced of F1 2014, is that it is the unchanged front wing, rear wing and tyre damage system that’s been a staple for some years now. It seems my longing for an F1 game with a truly realistic and consequential damage system will go on for another year. 
It’s a happy return for dynamic weather, which was omitted in 2013. This means that your hard work throughout a race weekend could be ruined brutally by one cloud in the wrong place. The dynamic weather can also add a bit of humour into the game, as I found when I was hit by rain during the practise of Melbourne, resigned to my fate of it being a terrible weekend and ended up winning in the dry. The game seems full of these little quirks that left me smirking. Flying around Melbourne is always enjoyable, and the game so far has nailed making races exciting.

This isn’t to say that the game is shaping up to be ideal, though. Visually it appears to be sticking close to home, maybe too close to home. Similarities to 2013 are something I can see potentially being an issue, both graphically and mechanically. Lighting effects appear toned down in comparison to 2013. The bloom on helmets and cars appear to have been removed completely, giving the lighting a more realistic feel this time around. If you were worried about being blinded by reflection from that chrome Mercedes, don’t be.

Car models do appear a little dated, as does much of the terrain throughout each circuit. Spotting a crowd member while racing is like seeing a something out of Silent Hill, as the blocky, pixelated creature waves its arms and screams to the moon as you roll on by. 
A disappointing omission is the classic content from F1 2013. It seems that the ability to drive the classic cars of yesteryear was a feature exclusive to 2013, but it’s a shame to see it gone, as it was an enjoyable add-on. I’d have loved to go through it again, maybe to have even seen it expanded on, but unfortunately, it’s not to be.

In terms of the PC release, F1 2013 suffered a lot from ignoring PC specific options, even going so far as to omit a fullscreen option, leaving players trawling through their config files to fix the issues plaguing the game. As such I’m hoping Codemasters learn from that experience and make sure the PC release gets the care it requires.


When looking through game modes you’ve got exactly what you’d expect, a quick race, career, multiplayer and ‘proving grounds’, which are your time trial, scenario and time attack modes. Career has had a light change in the fact that you now can join any team from the get go, instead of joining the back of the pack and working your way forward. Other than the minor changes, though, everything appears very familiar.

It clear that Codemasters are trying to open the game up to a new audience, but it remains to be seen whether or not they’ll alienate existing, perhaps more hardcore players, with the changes they’re implementing. From the time I’ve spent with F1 2014, I can’t see that being the case, but we'll have a full review for you when the game releases on the 17th (on PC, PS3 and Xbox 360).

Those of you wondering about a ‘next gen’ release should note F1 2015 will be the game that sees the series move over to the PS4 and Xbox One, reportedly with a brand new engine to boot. Not much information is available on this title, other than the fact that it’s in production at present.