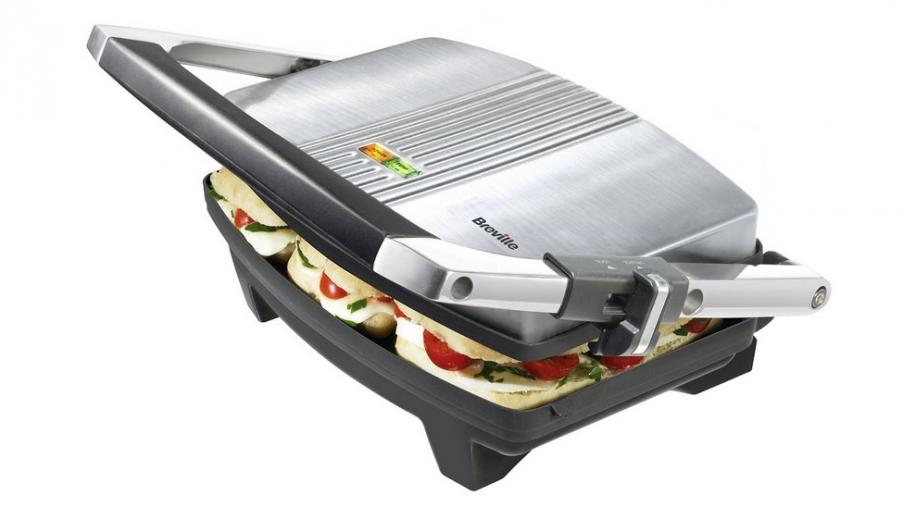 Even if merely sitting and watching is nowhere near as strenuous as actually playing, the dedicated armchair fan still requires sustenance.

The problem is, of course, that preparing food is time consuming and with the times the games are scheduled means they will overrun most meal times, other than breakfast, and that alone won’t keep you going all day so we’ve put together a five-a-side team of easy to use snack and meal makers that won’t break the bank and should see you through 90 minutes, and beyond. You can pay an awful lot more than the £42-ish the Smart Hot Dog Toaster costs – we’ve seen some topping £500 – but since it’s such a simple thing to warm through, there really shouldn’t be the need for that kind of outlay. Preparing a hot dog isn’t the most difficult thing to do but you would normally need to be in the kitchen, and therefore away from the TV, but with Smart’s Hot Dog Toaster, you can plug it in next to wherever you’re sat. The unit holds up to two regular-sized hot dogs and two hot dog buns at one time and it has a drip tray for easy clean-up afterwards. The toaster also features an adjustable cooking timer and comes with its own set of tongs. You certainly could do Wurst! The Retro Mini Hot Air Popcorn Maker is another inexpensive snack gadget, priced just shy of £28. There’s probably no quicker thing to make than popcorn and, depending on how you decide to flavour it, it won’t pile on the pounds either. Preparation is simply a case of filling the hopper with kernels (you get a free pack with it), flicking the switch and waiting for around 3 minutes when out shoots light, fluffy popcorn. To keep with the healthy motif, no oil is required either. Dare we say, a-maize-ing? Yes, we went there! When it comes to snacking, you can’t get any more British than a toastie. We did invent the uncooked version of it after all and the range of fillings you can include is only limited by your imagination, or what’s in your fridge at least. The brand we most associate with the toastie machine, or maker, is Breville although admittedly they’re an Australian based company but let’s not dwell on that. Their top of the range maker is the VST026 (£44.99) which is a 4 slice machine but you’ll get the same performance from the two slice VST025 (£24.99) if you don’t need that kind of capacity. You get 2000W of power from within the stainless steel design which is easy to clean and, naturally, features ‘Cut and Seal’ technology which can accommodate different bread sizes. It’s removable cooking plates are dishwasher safe too. Not only is this sandwich toaster great for making up to 4 sandwiches at a time, you can use different types of bread; from panini, ciabatta and focaccia bread or you can warm naan, tortillas, cook crumpets and toast teacakes so it’s a versatile beast as well. So stop loafing around and maybe even treat your butter half to this classic snack. Not so much a snack maker as an easy way to prepare something truly nutritious without tying you to the kitchen all day, the slow cooker is one of our favourite culinary accessories. In all honesty, with them being such simple devices there’s probably very little to choose, performance wise, between the various slow cookers on the market. You can pick up something perfectly serviceable for as little as £15 or you could go for something more technologically advanced for as much as £200. The Sage by Heston Blumenthal BPR700BSS (£199.95) is billed as ‘The Fast Slow Pro Slow Cooker,’ which combines the benefits of a slow cooker and pressure cooker into one unit. The Fast Slow Pro, they say, takes the guesswork out of cooking with 6 pre-sets including pressure cooking, slow cooking, searing, sautéing, reducing and steaming. Once you’ve selected your desired pre-set, this model automatically adjusts the time, temperature and pressure between fast and slow cooking. Dual sensors at the top and bottom of the appliance monitor ingredients for more accurate temperature and pressure control. The variable steam release function allows steam to be automatically released as your food cooks, ensuring that no matter what you're cooking it should always stay tender and taste great and that’s very little limit in what you can do in a slow-cooker; just be aware that anything saucy might require some thickening at the end. There’s nothing quite like the taste of fried food but it can be unhealthy and fattening, unless you use one of the new breed of fryers. One such is the Tefal ActiFry (£99.99) which can make 1.5 kilos of crispy home-made chips – enough to feed a family of six; that’s 100 times less oil than a traditional deep fat fryer. You can also use it to make curries, casseroles, stir-fries, risottos, desserts and more. The Tefal ActiFry features an audible countdown timer meaning you can sit down and watch the games while you wait for it to sound. There’s also an automatic lid which conveniently opens at the push of a button, so that you can add other ingredients or seasoning during cooking. The automatic temperature control has a unique patented hot air distribution system, which circulates the hot air through the food for even cooking and with a transparent lid, it’s easy to look at what you are cooking. Owing to the lack of oil, the ActiFry is also much less smelly than a normal deep fat fryer and they’re also much safer too. The ActiFry also comes with a personal recommendation from our Editor, Phil Hinton, so you can buy with confidence!

PROMOTED: The Next Generation of Phone Contracts