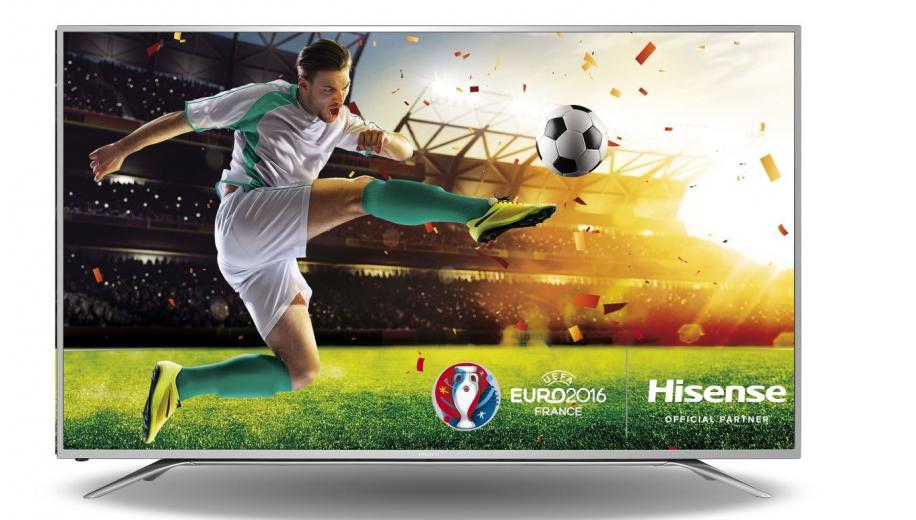 All the television manufacturers love a major football tournament for the very simple reason that it presents them the opportunity to shift some stock.

For football fans, the urge to upgrade and/or upsize their TVs becomes closer to want than need and since competition between retailers and manufacturers is so fierce there are some excellent deals to be had. We’ve already provided you with some options from the top-end of the market but if your budget is more Leicester than Manchester United there are still some great TVs to be had. So here are four of the best budget TVs available as we head in to Euro 2016. The Panasonic DX750 comes from the manufacturers midfield (midrange) and is available in a choice of three screen sizes: 50-(£1,099) , 58- (£1,299) and 65-inch (£1,879) so you’ll be getting big screen action whichever you opt for. The 50- and 58-inch versions include the unique 'Art of Interior' switch design stand, with chrome boots (feet) that can be poisoned in four distinct ways to suit your setup. The look was actually conceived by a fancy Euro design house to lend this one further championship credence and however you configure it, the DX750 is a definite looker; even the backside has been given some protection courtesy of detachable panels that cover up any connected cables. The DX750 reflects its status with a strong set of features that includes the 4K Pro Studio Master UHD and Studio Master HCX processing found in the DX802 and DX902. The DX750 produced unusually strong black levels for an LED LCD TV and, as a result, very good contrast performance which is a blessing given that the dimming features aren’t all that impressive. What was particularly striking about the Panasonic was its incredibly accurate colour palette so, for instance, you’ll easily be able to distinguish between the various hues of red used in the first choice kits of eleven of the nations involved. Not only did the DX750 deliver great 2D images in both Standard and High Dynamic Range (HDR) but it also acquitted itself very well in 3D and it’s one of a select bunch to even support three dimensional video in 2016, so it’s definitely a great choice for fans of that particular format, whether you can watch the footy in that way or not. The Hisense K321 was released in late 2015 but you can still pick one up if you’re quick off the mark. The 55-inch version of this well specified 4K Ultra HD TV is, in fact, available for as little as £490 which is the very definition of a bargain considering the K321 is blessed with up to date connectivity in the shape of three HDMI 2.0 ports that are HDCP 2.2 compliant and Ultra HD streaming via Netflix, Amazon and YouTube. Both the 55K321 and 50-inch version (available at around £430) present a minimalist design with a very narrow bezel surrounding the chassis which sits on a pair of contemporary looking, metal-effect feet. The K321 provides very good native black levels and good contrast, allied to above average motion handling although the colours could be more accurate; that won’t really be much of an issue for the euros but if you’re a film purist you might want to consider spending a little more. Video processing capabilities, in general, are impressive with deinterlacing of broadcast high definition sources a particular highlight, which is good news in terms of the transmissions we’ll be getting from France. We’ll not pretend that the Hisense K321 is anything like the best TV we’ve been sent to review in the last 12 months but it does possess a decent degree of future-proofing and if you’re after big-screen budget action, it’s a definite contender. The Samsung J6300 is another 2015 television but you can still pick up the 48-inch version at the bargain price of £449. There’s also the UE32J6300 (£299), UE40J6300 (£349) and UE55J6300 (£699) all still readily available, so there should be one to suit your budget and size requirements. In fact, the Samsung J6300 probably now represents the cheapest way for you to get your hands on an in vogue curved television. It’s a Full HD (1080p) rather than an Ultra HD model but that’s of no consequence as far as the UK is concerned for the broadcasts we will receive. As well as the curved screen, the base stand is also very attractive and the UE48J6300 is extremely well connected, courtesy of 4 HDMI ports and all the legacy inputs you’re likely to need. As with all Samsung Smart TVs, you will be spoiled with the number of apps available via the Smart Hub, which includes both the ITV Hub and BBC iPlayer for catching up on any games you’ve missed; additionally you can also hook up a USB hard drive to record and when you’re done with the Football, you can unwind with a spot of Netflix or Amazon video which are also both included. It’s not just all about the apps, of course, and the Samsung J6300 also provides excellent picture quality thanks to deep blacks, natural colours and top-notch picture processing so if you fancy a curveball but shy away from the premium prices that many command, the J6300 is a very worthy choice. This is another TV from 2015 but still widely available online for between £649 and £699, which is a minimum of £300 off the original asking price. There’s also the 40W805C (£399) and KDL-48W805C (£429) both still able to be purchased from various retail outlets. As with the Samsung directly above, the W805C is a 1080p TV but that’s fine for the majority of folk and no obstacle for you enjoying the footy. The design is gorgeous and typically minimalist, with a Size 0 bezel framing the screen and a chrome cut-out stand propping it all up. Connectivity options certainly couldn’t be classed as budget as there’s 4 HDMI ports, 2 USB, digital audio out and the usual legacy video (Scart, Composite & Component) inputs included. Sony’s Smart TV platform is built on Android which gives you a lot of freedom as well as providing thousands of apps to choose from. Those include all the UK catch-up services and the ability to record to USB storage so your bases should be covered in terms of catching all the games you want. As with most Sony’s the out-of-box settings in the Cinema mode are nice and accurate and that doesn’t just apply to watching movies, it’s the one you’ll want to see the action at its best. The black levels and dynamic range of the images were also very good and Sony’s MotionFlow processing is probably the best in the business for smooth motion without the forced, unnatural look. Unlike a lot of the 2016 TVs, the Sony W805C is 3D capable as well so it’s a great all-rounder currently up for grabs at a very attractive price-point.

So there we have it, four TVs that will allow you to enjoy Euro 2016 without breaking the bank, or your relationship. Let us know what you think in the comments below.