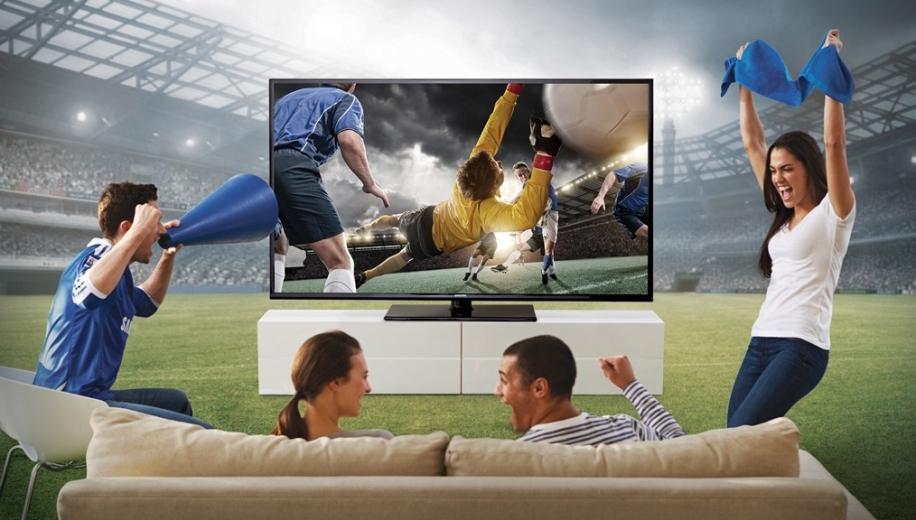 The year 2016 not only marks the 15th staging of the European Football Championships, it will also go down as a landmark year for TV technology.

The resolution revolution is in full swing; high dynamic range (HDR) video is ‘a thing’ and Ultra HD Blu-ray has been released. As a result, the new breed of TVs coming to market are some of the most exciting we’ve seen, with wider colour palettes and significantly increased brightness and contrast performance teaming up with the increased pixel count to produce outstanding images so, if you were contemplating a new big-screen TV purchase for Euro 2016, it’s a great time to leap in. The Sony XD93 comes in both 55 (£1,799) and 65-inch (£2,799) screen choices, with both featuring the same expansive set of features and specifications; there’s Sony’s impressive new Slim Backlight Drive, the 4K Processor X1 and the Android TV platform which has YouView integrated, so you can even attach a USB hard drive to make recordings of the games to ensure you never miss a minute or use the catch-up apps from ITV and BBC as an alternative. The build quality and design is Premier League, with its sleek chassis complemented by an attractive inlaid trim around the bezel, while connectivity options are cutting edge and capable of handling all the new formats. What really sets this Ultra HD TV apart from the crowd, however, is its spotless screen uniformity meaning there is no dirty screen effect or any panel banding on panning shots, making the football an absolute pleasure to watch. That’s not all the XD93 had in its locker, either, as black level and contrast performance were also top-notch, colours were out-of-the-box accurate and motion handling among the best we’ve seen in an LED LCD television. This Sony also meets all the necessary credentials to be certified as Ultra HD Premium so HDR images were sublime too. As a TV for sports lovers, the Sony XD93 is undoubtedly first-rate but it won’t let you down with whatever you choose to watch on it! This high-end TV also comes in two screen sizes – the 65-inch model (£3,200) we reviewed and there’s a 58-inch (£2,700) version also. The DX902 is the result of at least three years planning following the abandonment of plasma production by Panasonic as they seek to conquer the LCD market. As we would expect from a flagship telly, the build quality is excellent and the design is typically understated with an all black finish to its elegant ultra-narrow bezel that’s just 1cm wide all around the screen. The DX902 has a fairly comprehensive set of connections and ticks all the boxes as far as future proofing is concerned. As you may have seen in Panasonic’s television advertising campaign, the company has been working with the Hollywood community and the DX902 was even tuned by a leading colourist to ensure ultimate colour accuracy; that’s not just a bonus in terms of watching movies, it means you’ll be seeing all the kits, pitches and scenery from the Euros as accurately as possible on a display designed for the domestic market. The DX902 also incorporates Panasonic's new 'Honeycomb' local dimming that uses 512 zones and a special structure to reduce light leakage and thus haloing effects, so those games under the floodlights should look superb. Like the Sony above, you can also hook up a USB hard drive to record the fixtures as well being able to access all the catch-up services courtesy of the inclusion of Freeview Play. The motion handling was excellent for an LCD panel and you can call upon some impressive processing if you feel it requires any assistance. If you're looking for an Ultra HD 4K LED LCD TV that has the lot, look no further and the Panasonic DX902 is so good that Panasonic fans might actually forget about plasma. While our formation might be looking a little unbalanced, given this is the third ‘number 9’ in the line-up, this is another Ultra HD HDR TV that strikes all the right notes. The Samsung KS9000 has three screen size options, with 49-(£1,699), 55-(£2,099) and 65-inch(£2,899) models in the ranks. There’s a lovely 360-degree design which is almost as solid at the back as it is up front and the chrome stand not only gives the impression that the TV is floating but also provides stable support without using a huge footprint. The One Connect box includes four HDMI 2.0a inputs and three USB 2.0 ports, along with twin tuners, built-in WiFi and means you only need two cables to run to the back panel, which is great news for those wishing to wall-mount. The Smart TV features are as cutting edge as ever and a new design makes the Hub even more intuitive. Picture quality is excellent, with outstanding accuracy while video processing was also superb – the Motion Plus technology is very impressive and the moth-eye filter on the front of the panel means reflections will be at a minimum for the afternoon and evening kick-offs. Despite the use of edge mounted LEDs, the backlight was very uniform and the Samsung managed to generally avoid the pitfalls of the technology so it’s definitely another to put in your provisional squad of potential buys. The 8601 sports a lovely design that brings plenty of Euro-flair, with elegant chrome feet and a razor slim panel. Unusually – but we really like the idea – this Philips features detachable speakers at either side which can be placed on optional stands and there are two subwoofers built in as well, so it will reproduce the atmospheric crowd noises much better than most. The PUS8601 also features four sided ambilight so you can bring the on-screen colours alive on your walls and surroundings; it’s not something we’d recommend for movie watching but if you have friends over for the football, it will be sure to impress. The supplied remote control is also quite innovative and has a QWERTY keyboard on one side to make using the built-in Android Smart TV platform easier to use. The panel inside the PUS8601 is 10-bit and of Ultra HD resolution while this high-end TV boasts a lot of Philips’ best processing, including 1800Hz Perfect Motion Rate and Perfect Natural Motion for the smoothest possible images. Backlight uniformity was good, as were black levels and contrast while colour performance was also suitably accurate. When it came to high definition broadcasts – as we hope you’ll be watching the Euro’s in - the Philips could deliver some lovely looking images with surprisingly effective motion handling maintaining detail when the action speeds up. The Philips brand might not be as popular as it once was but if you’re looking for something that stands out from the crowd, the PUS8601 certainly fits the bill!

We've yet to see the 2016 LG OLED TVs which would have almost certainly made the list but that's some line-up as it is that will not only allow you to enjoy Euro 2016 but also stand you in good stead for the years to come.