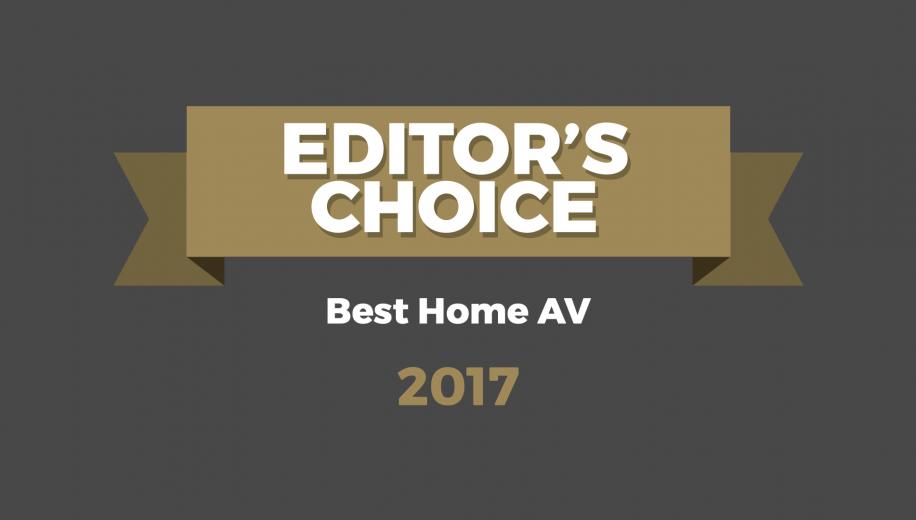 If you are a regular reader of the AVForums reviews you will see that now and again certain products are awarded with a Recommended, Highly Recommended, a Best Buy or Reference Status badge. These are given to products that reach a certain level of performance in their category and price point, but we have never chosen our best product of the year, until now.

Unlike the review badges our Editor’s Choice Awards celebrate the best product of the year. These are the items we think stand head and shoulders above the rest. Plus we tell you why we have chosen these particular items and why you should consider them for your own set-up at home. The criteria for being eligible are simple. It must be a product that has been reviewed by AVForums in the last 12 to 18 months and it must currently be available as part of the official product range from a manufacturer and not discontinued before the end of 2017.

Over six articles we will present the awards for TVs, Projectors, Home AV, AV Streaming Service & Devices, Hi-Fi and Tech & Mobile. In this article we select our favourite products of the year in Home AV: 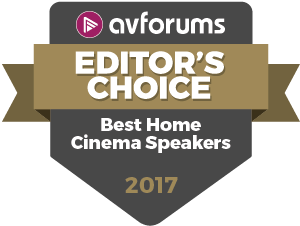 This sub/sat speaker system is not cheap, so there's no doubt it's an aspirational product but there's also no doubting that the performance on offer is astonishing. The MK sound is to reproduce what is actually there and present it as close as possible to the source. So it doesn't flatter badly recorded or mixed movies or music and simply plays back what is there but with good recordings and soundtracks the performance is simply exceptional. Music and movies are brought to life with incredible accuracy and detail, along with stunning dynamics. The soundstage is massive with amazing depth and outstanding cohesion and envelopment, mixed with frighteningly fast transitional changes in volume and dynamics. It never gets tiring to listen to this system and it doesn’t take tens of thousands of pounds in amplification to get the best out of it either, with even modest AVRs able to drive this sub/sat system. The low end is handled by the two outstanding X12 subwoofers which leaves just 80Hz and higher to the MP300 and S300T speakers. Even with a 4 Ohm load the sensitivity of the speakers means that they can be easily driven properly. Obviously feed these speakers more power and they respond in kind and the added headroom of a separate power amp will have more impact with faster stops and greater dynamics. This system is superb and is composed of the Best Home Cinema Speakers of the year. 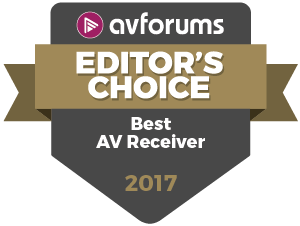 The X4400H is the latest mid-range AV Receiver from Denon and as such it comes packed with every feature imaginable. This 9-channel AVR supports Dolby Atmos, DTS:X and Auro-3D out of the box and if you want you can add two more channels of amplification and two subwoofers to run a full 7.2.4 immersive audio system. The X4400 has 8 HDMI inputs and 3 HDMI outputs, all of which support 4K/60p 4:4:4, High Dynamic Range (HDR10, HLG and Dolby Vision), Wide Colour Gamut (Rec.2020) and HDCP 2.2. Thanks to a firmware update planned for next year, the receiver will even support the Enhanced Audio Return Channel (eARC) feature. If that wasn’t enough the X4400H also supports Denon’s HEOS multiroom system, along with an excellent remote app. The setup is easy, the remote well designed and the performance is excellent, making the Denon AVR-X4400H our choice for the Best AV Receiver of the year. 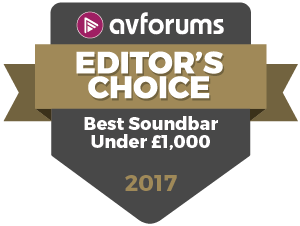 These days it's a simple fact that the ultra-slim nature of modern TVs means some form of outboard audio solution is required to enjoy superior sound. As a result the market for soundbars has exploded, with models now offering surround sound and even Dolby Atmos. However, for those who simply want to improve the sound quality of their TV without any hassles or wires, the Q Acoustics M3 is the ideal choice. It does exactly what is says it will and does it very well indeed. It will fill a typical living room with decent sound from under your TV, with a nice weight to the audio and vocals along with decent music playback as well. It is incredibly easy to set up and this, along with its very good audio quality, is what will undoubtedly attract consumers to the M3. It is up against some very tough competition at the price point but the M3 does an impressive job of sounding very good indeed with excellent stereo and TV sound reproduction that is natural and clear with a decent underpinning of bass. So for its combination of features, performance and price, the Q Acoustics M3 is our choice of the Best Soundbar under £1,000 this year. 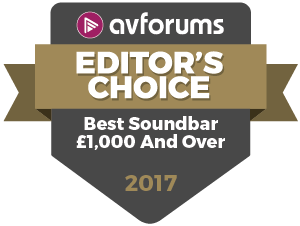 The Samsung HW-K950 is a Dolby Atmos soundbar that, unlike a lot of other soundbars, is able to deliver a genuine 5.1.4-channel immersive audio experience. The soundbar itself is attractive, the build quality is excellent and the remote control is effective, whilst setting up and controlling the soundbar is simple. There are wireless active surround speakers that are designed to match the soundbar both in terms of design and tonal quality, creating an effective five-channel setup. The addition of a powerful wireless active subwoofer and four upward-firing speakers means that the K950 can also deliver a highly effective Dolby Atmos experience. Although the Samsung doesn’t support DTS:X, it can accept a DTS 5.1 signal and it can apply Dolby Surround upscaling to non-Atmos soundtracks. The two HDMI inputs support HDR and the output also supports ARC and the K950 includes Samsung's Multiroom system for streaming music. All these features combined to make the Samsung HW-K950 the most accomplished performer with Dolby Atmos and, as such, it’s our choice for the Best Soundbar Over £1,000 this year. 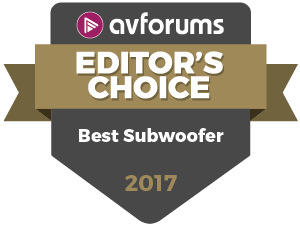 SVS set out to make the best sealed subwoofer they could when they developed the SB16-Ultra and overall we’d say they’ve succeeded. The subwoofer itself manages to appear attractive considering it's a black cube and the display is an interesting touch that thankfully can be turned off. There’s a new smartphone app that offers effective control thanks to an excellent user interface, whilst installation is very flexible and once the SB16 has been set up, you’ll be seriously impressed with its performance. The 16-inch driver, 8-inch voice coil and 1,500W of Sledge amplification mean that the SB16 can deliver incredibly deep bass for a sealed box but also do so in a surprisingly fast and agile way. This is one powerful and responsive subwoofer that can handle both movies and music with ease. Thanks to its effective combination of power, grace and speed, the SVS SB16-Ultra is our choice for the Best Subwoofer of the year. 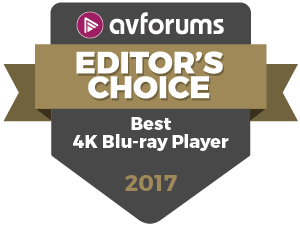 The Oppo UDP-203 was one of the first Ultra HD Blu-ray players launched in 2016 but it was designed to be a long-term product and the ultimate statement in terms of 4K disc playback. The UDP-203 is attractive and very well made, with an informative display, excellent on-screen graphics, a well-designed remote and an easy to use menu system. The player has state-of-the-art video processing, universal disc support, digital and analogue audio outputs, twin HDMI outputs and even an HDMI input. The Oppo delivers a flawless video and immersive audio performance with 4K Ultra HD Blu-ray and also supports Dolby Vision, as well as offering a feature that strips the HDR metadata, which is handy for using with projectors that support 4K but might struggle with high dynamic range. The Oppo UDP-203 isn’t cheap but it does everything and it does it extremely well, making it our choice for the Best 4K Ultra HD Blu-ray Player of the year. 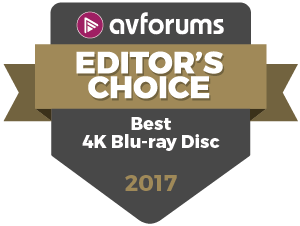 Blade Runner bombed on its initial release in 1982 but over the years it has been re-evaluated by critics and audiences alike and is now considered a classic of the science fiction genre. This Ultra HD Blu-ray release is based on the full 4K restoration of the film, during which director Ridley Scott took the opportunity to fix various mistakes and deliver what he considers to be the final cut of his masterpiece. The results on 4K disc are simply stunning, with draw-dropping detail, fantastic use of high dynamic range and lovely colours thanks to the wider colour gamut. The audio mix has also had an upgrade and the resulting Dolby Atmos soundtrack is as impressive as the visuals, making this the best that the film has ever looked and sounded. The package also includes all the previous extras, including the three hour Dangerous Days documentary and three other versions of the film on Blu-ray. Blade Runner The Final Cut is a must-have release for fans of the film and our choice for the Best 4K Ultra HD Blu-ray Disc of the year. 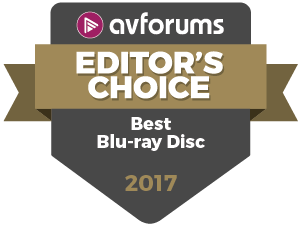 The Thing came out in the same year as Blade Runner and like that film it was a flop on its initial release. Critics and audiences alike weren’t prepared for such a bleak, visceral and cold film in the ‘Summer of ET’ but The Thing found its audience on home video where its innovative make-up effects could be watched over and over again. It is now considered one of the greatest horror films ever made and this Arrow Blu-ray release is based on a new 4K restoration of the original camera negative that was supervised by director John Carpenter and director of photography Dean Cundey. The results are superb, with the film looking better than ever in Full HD and a number of different soundtrack options made available as well. There’s an extensive set of extras, including a new feature-length documentary about the making of the film, and a cool reversible sleeve. This new release of The Thing is a must for fans of the film and is our choice for Best Blu-ray Disc of the year. 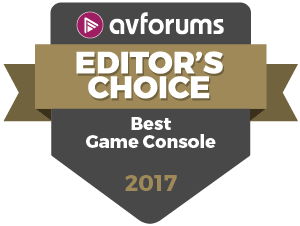 If you're in the market for a competitively priced games console that can also play Ultra HD Blu-rays, then the Xbox One S is a bit of a no-brainer. It’s an excellent gaming machine but, even if you're not interested in games, it's still worth considering because the Xbox One S is also an excellent 4K disc player with a great video and audio performance. Yes it isn't perfect, it's fairly noisy, the disc loading and navigation are a bit slow, the operating system feels slightly confusing and we'd definitely buy a media remote to use instead of the gaming controller but in pure performance terms we had absolutely no complaints. The Xbox One S is also well made and we like it's understated appearance, which means it won't look out of place in an equipment rack. There's a lot of choice when it comes to cheaper Ultra HD Blu-ray players but if you’re looking for a machine that also plays games then the Xbox One S is the only choice, making it our Game Console of the year. 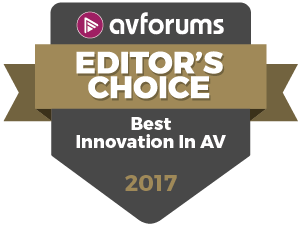 The biggest buzz word in AV entertainment this year has been HDR (High Dynamic Range) and much of the development was done by Dolby over the last decade. So it seems fitting that their proprietary version of HDR – Dolby Vision – should be our choice for the Most Innovative AV Feature of the year. Like the open standard HDR10, Dolby Vision uses Rec.2020 and a maximum peak brightness of 10,000nits but uses 12- rather 10-bit video depth. In addition, along with static metadata relating to peak brightness, Dolby Vision uses dynamic metadata that changes the brightness from scene to scene and even frame to frame – resulting in a superior viewing experience. The format has made big in-roads this year, with manufacturer support from LG, Sony, Vestel, Loewe, Vizio, Funai, B&O and Toshiba; as well as content from Netflix and Amazon, along with studio support from most of the major studios via Apple’s iTunes and Ultra HD Blu-ray.