New IP and the return of South Park 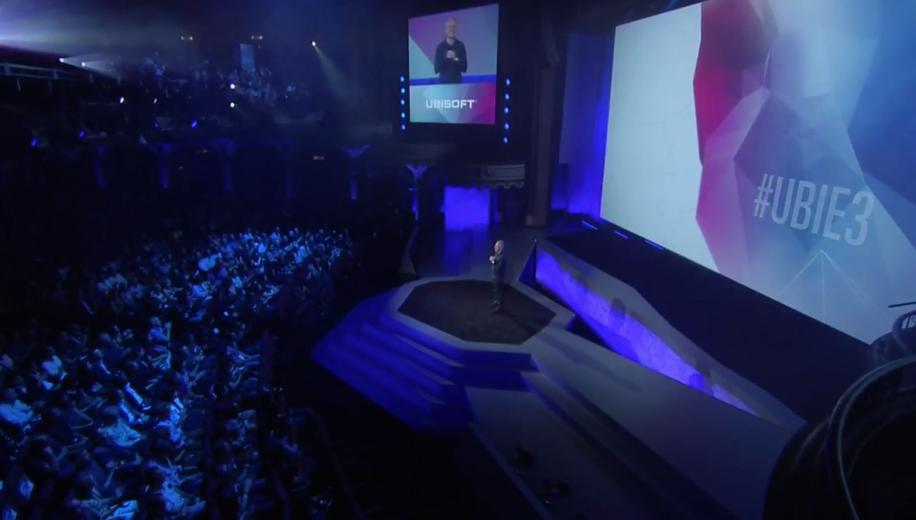 As far as hitting the right notes go, Ubisoft can probably consider themselves to have this conference lark pretty much covered now. They've worked these last few years on a reasonable blend of humour, not too many executives and just enough proper gameplay demos to avoid accusations of excessive cinematic trailer syndrome. It helps that Aisha Tyler is presenting though, as once again she shows the value in having someone at ease with the crowd, even when she misreads her lines.

The tone was set well, with a nice reveal to puncture the pomposity of the grandstanding event. As the intro reel kicked in, and the text hinted that an "epic RPG returns" in a Tolkien-esque script, nothing could have been further from the earnest set up than a sequel to South Park: The Stick of Truth! The name says it all - South Park: The Fractured But Whole.

The setting's changed to a superhero theme, with Professor Chaos and The Coon featuring front and centre, and the humour is still as base as ever. Ubisoft San Francisco are set to continue the tale of the new kid, but it's plain to see that the formula remains the same. Series creators Trey Parker and Matt Stone were wheeled out to express enthusiasm, but all they could muster was a But Whole joke, which was probably worth it anyway.

With the unenviable task of following that was Ubisoft CEO Yves Guillemot, whose lead in was as the man with the surprises, talking of the company as one that liked to take risks. Given the show's centrepiece was always likely to be another Assassin's Creed, you'd be forgiven for thinking you heard a collective sneer.

Still, he came up trumps with the unveiling of a new IP from Ubisoft Montreal called For Honor. This medieval combat game had a pretty visceral cinematic trailer, full of battle sequences and close melee combat that finished in gruesome fashion. The talk of a new kind of gameplay called "the art of battle" was meaningless, but at least we got to see a hands-on demo as two teams of four entered the maelstrom of a castle siege amid other troops, before finally facing off in close quarters player versus player combat. It's already looking like it could have some depth, thanks to the parry and block system and the changes of stances, but the big draw will be vikings, knights, samurai and decapitations.

There's usually some minor filler, pushing current games and DLC and this was the breather section. The Crew will receive an expansion called Wild Run, out 17th November, which looks to feature dirt bikes and monster trucks amongst other things, whilst Trials Fusion will also get an update, but this time a little sooner, on July 14th, entitled Awesome Level Max expansion pack.

Breather over, it's back to the big guns, and a title that's been conspicuous by the absence of details recently, Tom Clancy's The Division. Game director Ryan Barnard introduced us to the "dark zone" and the interesting issue of what happens when you encounter another group carrying loot in this post apocalyptic hellish vision of New York ravaged by a killer virus. The emphasis was on the shifting power dynamic, as you meet potential friends and foes, and the choice of how moral you are is entirely up to you. For once, the demo - amid the poorly enacted scripting of team work - made its point well, and proved there will be genuine decisions to be made.

For a game that seemed to be hiding away, it's great to hear it'll be playable on the show floor and it finally has a firm release date of March 8th next year, with a beta on PS4, XB1 and PC slated for early next year

Switching things up nicely from all the shooting was Anno 2205, a city-building game from Blue Byte which takes a futuristic twist on things. After another CG trailer we got to see the moon, spaceships, some interesting architecture and details of the beta later this year before a release on November 3rd.

Still in breather mode before any more violent games the show moved on to Just Dance 2016. The big news this time around is that a camera peripheral is no longer needed. for those who either have no such accessory, or perhaps XB1 owners who don't wish to set their Kinects up, there will be the option to play with a smartphone. After the requisite song and dance from a famous pop star - Jason Derulo (thanks Google) - and the ensuing album/single plug, it was unveiled that the Just Dance Unlimited streaming service would unlock a plethora of new content for PS4, XB1 and Wii U owners, thanks to the dance on demand subscription service when the game launches in October.

Done with the breather, it was back to good old fashioned shooting, and the reveal of Rainbow Six Siege. After a brief cinematic trailer that featured the unmistakable visage of actress Angela Basset, we got the news that Terrohunt mode would be present, and then a nice protracted demonstration of the mode. Playable solo or with up to four friends, the demo showcased some nifty tech use, the standard SWAT style action and even an upside down headshot whilst mid-rappel. The beta was announced for September 24th, and will feature both player vs. player and Terrohunt modes.

Next up was Treadmania Turbo, making the leap from PC to consoles, and bringing with it a host of tracks, totalling 200. The live demo showcased the inventive looking track builder mode, which could conjure up a new randomised racing surface for you at the press of a button, combining locale, track layout and signage for you to hare past at impossible speeds with squealing tyres whilst defying gravity.

And with that things had been delayed long enough. Kudos for Ubisoft for going this long without mentioning their biggest money spinner, but it was time for Assassin's Creed: Syndicate to make an appearance. It was largely CG scene setting, but then everyone knows what an Assassin's Creed game plays like by now, and they're not going to try reinventing the wheel. This was to give a feel of the atmosphere that Victorian London gives, and in that sense it worked. The grime of the industrial revolution, and the squalor of the streets is looking palpable. Some of the voices even sound like they've avoided lapsing into Dick van Dyke too!

As the ensemble of ruffians from Syndicate finish the trailer by swaggering out of a pub brawl like a Camden indie band, there was one last surprise left to Guillemot to reveal, Tom Clancy's Ghost Recon Wildlands. An open world tactical shooter, it looks like there'll be a good amount of choice to how you attack targets in your war against the South American drug cartels. You can go sneak in under cover of night, lock and load with all guns blazing and even leave a central target alive, as his comrades will finish him off. Vehicles are looking like playing a key part in this instalment, and although there was little detail regarding the mechanics, enough was shown for it to be a fitting high point to close the show.