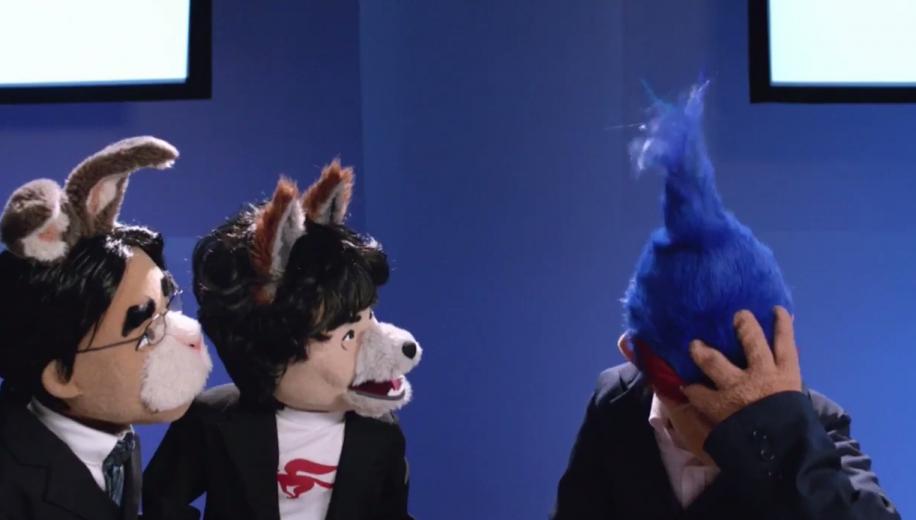 It was hard to see where this presentation would go, as details of the NX were said to be off the table, as was any appearance of Zelda on the Wii U, even though most of us sneakingly hoped there would be a little teaser to end things on a high note. The tone was set when the leaks prior to E3 came not of games but of more Amiibos, so it was hard to be totally disappointed with what was a fairly uninspiring hour.

Still, it started in lively fashion, with the employment of the jovial puppet theme they've used before. Satoru Iwata, Shigeru Miyamoto and Reggie Fils-Aime all morphed from Jim Henson style puppets into characters from Starfox, indicating that Fox's latest outing would be the focal point of proceedings. Away from the grandstanding of the live events, this was a far more low key affair with the iconic figures the company has, taking centre stage. As soon as the show opened we were whisked away to Fushimi Inari shrine in Kyoto, where Miyamoto detailed the inspirations that brought about the creation of Starfox Zero. It did however give us time to see some of the finer points of the game, such as the use of the GamePad's gyro and screen to get a different view, and how the button mapping was decided in order to give intuitive control.

The most interesting aspect of the gameplay shown was the ability of the R-Wing to transform into different vehicles. There's a Land Master and a Gyro Wing, and the hope is that players will want to go back to stages they've already beaten in order to experiment with the varying vehicles. It looked good, but still fairly basic.

Whether Nintendo actually has anything of note to say about the NX right now, or many projects up their sleeve, Reggie was on hand to reassure us that this presentation was about the games we'd be playing sooner rather than later. Oh, and if you're wondering about the NX, the schedule for more details is still a nice and vague "2016".

So, with the focus on the here and now, we heard more about Amiibos by way of Super Mario Maker and Skylanders, both of which will feature the interactive figures. Karthik Bala was on hand from Activison to enthuse about their creation in the Skylanders universe. The novelty factor is ramped up as the Nintendo Skylander variants can double up as regular Amiibos by twisting their bases, and the two detailed come with their own vehicles too; Turbo Charge Donkey Kong with barrel blaster, and Hammer Slam Bowser with a clown cruiser. Then came a big franchise in a small form, and a look at Zelda Triforce Heroes on the 3DS. It uses an interesting co-op mechanic for three players where you can climb on each other's shoulders to form a totem. Some nice uses of team work were shown, where players combined in battle and with minor puzzles, throwing bombs, bridging gaps and even fighting bosses. It's a bit of a deviation for Nintendo, where multiplayer tends to take on a more fun and light hearted competitive air, and the setting of a kingdom of the fashion conscious adds an extra layer, as new outfits can bestow players with different abilities.

Even more portable Link action was on the way as it was announced last year's Hyrule Warriors would be reimagined for the 3DS, including all DLC in the shape of Hyrule Warriors Legends, due first quarter 2016.

A similar double whammy was in store for the Metroid franchise, but not in the way fans might have hoped. There was no sign of a true successor to Prime, but instead we got Metroid Prime: Federation Force and Metroid Prime: Blastball, both on the 3DS. Federation Force looks like a stripped back Prime game, with FPS co-op action, and hopefully the game will look significantly better nearer release. Whilst Blastball is a 3 vs. 3 sports variant on the Prime style of gameplay. You'd be hard pushed to find a more uninspiring reveal for the reemergence of a much loved franchise than these two, even if they do turn out to be fun to play. (Whilst I'd never advocate YouTube as a good barometer of public opinion, it's worth checking the below video's number of dislikes).

The 3DS was still at the heart of things as Fire Emblem is getting a rename for the West as Fire Emblem Fates, complete with a snazzy trailer and a nicely vague release window of 2016. Sticking with the Japanese theme, the trailer for Shin Megami Tensei x Fire Emblem must have confused a few people. No English dialogue, shouty figures, pop singers; for once the vagueness of "2016" seemed like concrete info. It was followed up by a great looking trailer for the J-RPG Xenoblade Chronicles X, on the Wii U, which has a release date of 4th December.

The cuddliness factor was ramped up to eleven, as we heard all about the creation of the original yarn Yoshi that inspired the character and the world in Yoshi's Woolly World. The chat about the game was interesting with regards how Amiibo's change your appearance, but in reality fans will be playing this soon enough anyway, as it's out in a matter of weeks (June 26th). Yo-Kai Watch got a release date, the now common ballpark date of "holiday 2015" before things turned decidedly Mario, and not a moment too soon.

There's an excellent looking mash-up of a game, where Paper Mario's universe collides with traditional 3D Mario's, in Mario and Luigi Paper Jam, due out next Spring. This was swiftly followed up by some action from Mario Tennis: Ultra Smash, which will be another 2015 holiday season title, before things were rounded off by Mario creators Shigeru Miyamoto and Takashi Tezuka enthusing about Super Mario Maker, whilst giving us an insight into the creative process - and scribbled drawings - that surrounded his inception.

And with a montage of colourful characters monkeying around to the Mario theme the show closed. It fared much better as a 3DS event than one designed to convince you of Nintendo's commitment to the Wii U, which was bizarre given the great J-RPGs in particular hidden in there. And with the Metroid prime franchise taking a turn towards the handheld, that split in the fanbase might get even more pronounced. Mario Maker and Starfox look fun, but Zelda on the Wii U can't come a moment too soon.