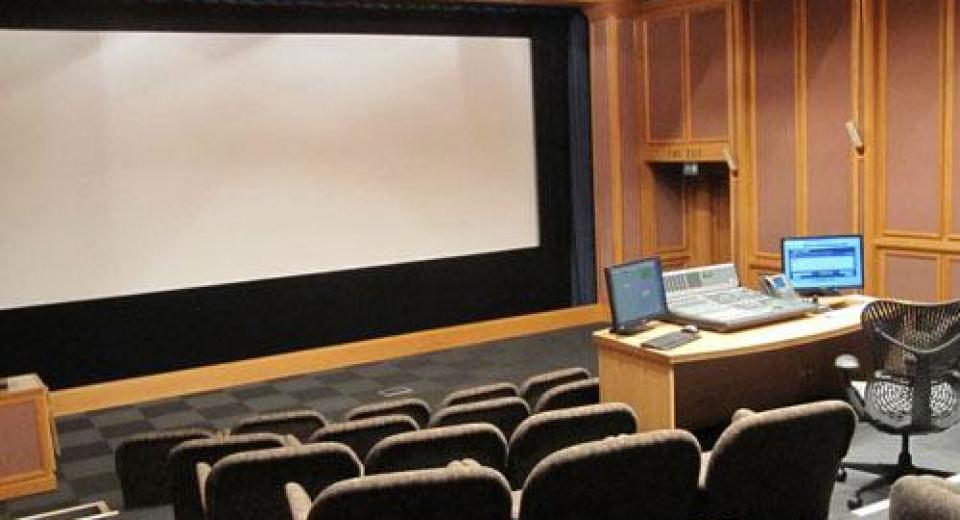 One of the main reasons for our recent visit to Dolby’s facility in Royal Wootton Bassett was that the primary screening room is currently one of the few places in the UK where you can experience Dolby Atmos.

What is Dolby Atmos? Well in simple terms it’s a completely different approach to film sound design and delivery, that moves away from the traditional channel based approach and instead introduces the concept of ‘objects’ or individual sounds that can be manipulated in three dimensional space. The result is that sound designers now have an unprecedented degree of freedom as they move sounds around the auditorium, whether it’s from front to back, side to side or even overhead. How is this done? Well let’s find out...

Walking into Screening Room 1, you immediately realise that you’re not in a normal cinema when you look up and see two arrays of speakers running overhead. You also notice that these speakers run from right up next to the screen all the way to the back wall, as do the side speakers, although is isn’t as obvious because they are built into the walls. All these extra speakers are one of the reasons for the greater immersion that Dolby Atmos offers and their position along the entire side wall allows for seamless pans from front to back. However there is more to Dolby Atmos than just extra speakers because the way a Dolby Atmos track is mixed and delivered is radically different from the traditional approach.

Currently a sound designer will mix a film soundtrack using five discrete channels - front left, front centre, front right, side right and side left - along with a LFE (Low Frequency Effects) channel which is the point one in a 5.1 surround mix. Even today the majority of films are still mixed in 5.1, although as mentioned in the previous article Dolby launched Dolby Surround 7.1 in 2010, so now there are a sizable number of films being mixed in seven channels. These 7.1 mixes add an additional two channels to the existing 5.1 mix and these channels represent rear left and rear right. There are competing next generation audio formats currently being developed for the cinema but unlike Dolby Atmos, those sound systems are still based on the concept of additional channels, either 11.2 or 13.2 in total. Dolby’s approach is completely different and it uses the concept of building soundtracks using objects, which equate to individual sounds or channels. From these 128 objects or channels, up to 10 can be allocated to the ‘bed’ which is the basic 7.1 or 9.1 mix, whilst the remaining 118 can be used for specific objects. At present sound designers are using between 30 and 40 objects but theoretically they could use up the the maximum 128, if they wanted to create an 'objects-only' mix. This will fundamentally change how sound designers think about mixing movies because suddenly every element in the frame is a separate sound object.

The problem at the moment is that the initial 5.1/7.1 mix is being produced and then the Dolby Atmos mix is being created by adding objects, thus extending what are already tight post-production schedules for films. What Dolby ultimately hope to achieve is the introduction of the Dolby Atmos Workflow where the initial objects mix is automatically rendered down to either a 5.1 or 7.1 bed for use in unconverted cinemas or for home video distribution. The Dolby Atmos mantra is 'author once, optimise everywhere.'

The Dolby Atmos mantra is 'author once, optimise everywhere.' The other major difference is how Dolby Atmos is delivered in the cinema, starting with the additional speakers. There’s no doubt that upgrading a cinema to Dolby Atmos won’t be cheap as you have to add the two overhead speaker arrays, along with additional side speakers that go right up to the screen. The specifications also call for full-range speakers to be used all around and the addition of two subwoofers at the rear in order to bass manage the surrounds. However it isn’t just a case of adding more speakers or additional channels of amplification because the way that Dolby Atmos renders the objects in the mix can give the impression of far more speakers than are actually in the cinema. This is achieved through a process called adaptive rendering, which starts by accurately modelling the cinema - the dimensions, the number of speakers, their exact positions, their power specifications - and then rendering the Dolby Atmos mix in the best possible playback so that it’s optimised to that specific cinema. This is possible because the audio elements are not locked to any specific channel but are stored with virtual position metadata and are assigned positions dynamically during playback, depending on the arrangement within a given cinema. This adaptive rendering is done on-the-fly but if there is a speaker where the object is supposed to go then it is used, if not then the Dolby Atmos processor will create a phantom speaker, thus effectively placing the sound in the correct place and creating the illusion of an infinite number of speakers.

...thus effectively placing the sound in the correct place and creating the illusion of an infinite number of speakers. The combination of additional channels and speakers, along with adaptive rendering that allows for object based steering results in an incredibly natural and immersive soundfield. Sound designers can place an object anywhere within a three dimensional space, with a precision impossible with conventional 5.1 mixes, resulting in incredibly smooth pans. To prove this, we were sat at the sweet spot and Nick Watson, a senior engineer at Dolby, played a 5.1 audio-only mix of a man with a guitar walking around the room.

In 5.1 there were clearly gaps as he walked from front left to side left and then across to side right. However in Dolby Atmos this was smooth and seamless and the result was the sound of a man playing a guitar as he walked around you. Nick then played another audio-only piece that was a rain hitting a tin roof above you, which used a 7.1 bed with additional objects. The result was incredibly realistic and having spent years living in Hong Kong we were very familiar with monsoon rains, the acoustic effect was positively transportive it was so natural. After that we moved on to two specially created Dolby Atmos trailers, the first of which is called ‘Unfold’, which is an object-only mix created by the sound designer for Transformers: Dark of the Moon. The sound mix was created first and then the visuals were added, so the sound designer had complete freedom to do whatever he liked and use Dolby Atmos to its full potential. The results, whilst somewhat reminiscent of Transformers, were stunning as the sound effects just surrounded and completely immersed you.

The monitor on the desk showed the Dolby Atmos adaptive rendering in action as objects were being moved around the wireframe model of the screening room. There were objects being moved around the model that you could clearly hear being rendered in the room and it was, quite simply, the most active sound mix we have ever heard. There was a second trailer called 'Leaf' that totally immersed you in a forest, surrounding you with sounds from the sides, above and behind, with seamless panning around the room. It was a more subtle and thus far more realistic effect than the first trailer but both were breathtaking. Then we moved on to some film soundtracks, the first of which was Rise of the Planet of the Apes, which had been remixed in Dolby Atmos. The sequence we watched was the battle on the Golden Gate Bridge and first we watched the playback without the 7.1 bed, just hearing the objects which consisted of sounds like bullet hits, roars, helicopters and the like. Then we watched it with both the 7.1 bed and the objects and you could hear how the sound designer was using the objects to augment certain effects or to precisely steer sounds around the room.

The second scene was from Taken 2, which was the second film released with a Dolby Atmos soundtrack and here the sound designers had used the objects in an imaginative way. In the scene Liam Neeson's character had been kidnapped with a bag over his head but he's listening for audio clues to where the kidnappers are taking him. When away from the inside of the van it was just the 7.1 bed but whenever the camera cut to Neeson's acoustic point of view the soundtrack filled with audio cues being move around the soundfield. The potential for the creative use Dolby Atmos is immense and aside from the obvious action beats it offers the ability to produce far more atmospheric soundtracks. In Brave, the first film to be released with a Dolby Atmos soundtrack, there is extensive narration which the sound designers mixed out from the edges of the screen to make it more expansive to match the widescreen 3D visuals. One can only imagine how effective Dolby Atmos would be if used in a horror film!

Dolby has taken the view that the best way to launch Atmos is to generate support amongst the content creators, as they feel this will then motivate the cinema chains to upgrade their theatres. Perhaps unsurprisingly, the first studio to embrace Dolby Atmos was Disney.Pixar who used the system when mixing Brave. The studio had previously been the first to use Dolby Surround 7.1 with Toy Story 3 back in 2010 and given that an animated film’s soundtrack is created from the ground up, Brave provided the perfect test bed for Dolby Atmos and its object based approach.

Since then, there has been Taken 2, Legend of the Guardians,Life of Pi and The Hobbit: An Unexpected Journey. Peter Jackson in particular has been a big proponent of Dolby Atmos and his Park Road post-production facilities in Wellington can now mix in the format. Jackson feels that Dolby Atmos is the pefect companion to the widescreen, high frame, 3D visuals he has created for The Hobbit. In terms of Dolby Atmos equipped cinemas in the UK, the first is The Empire in London's Leicester Square but more will be opening in 2013.

...surrounding you with sounds from the sides, above and behind, with seamless panning around the room The Holy Grail of cinema distribution is the single inventory solution where everything comes in one package. That was the case with 35mm where the image and all the soundtracks where on the film itself, which made distribution much simpler and multi-format audio far easier to implement. Dolby believes that they too can offer a one-stop solution and thus become the main supplier of digital cinema packages and decoders. It’s a high stakes game where the rewards are significant but Dolby already have the brand recognition that might give them the edge. Whatever the eventual outcome, there's no denying the technological achievement that Dolby Atmos represents and once again Dolby are heping to push cinema sound to the next level.