The quick answer is no! 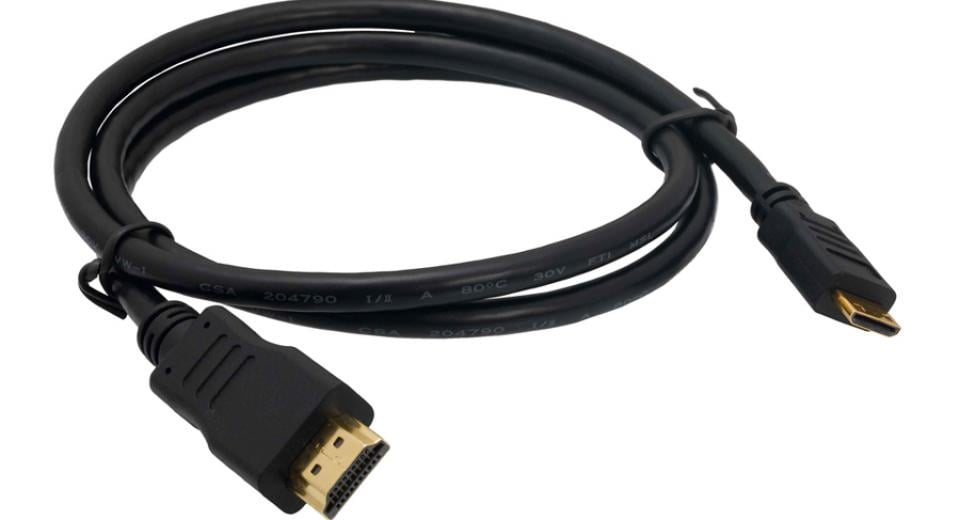 Or to put it another way, would you spend £100 on a USB cable?
There has been a lot of rubbish said about HDMI (High Definition Multi-media Interface) cables over the years but the simple fact is that anyone who says an expensive cable makes a difference to the image quality over short distances is trying to sell you something. If you've ever read a two metre HDMI cable review where the reviewer talks about increased image detail, better blacks or improved motion handling, they either have an agenda or a fundamental ignorance of how a digital signal actually works.

Whether you use the free HDMI cable that came with your product or drop a £100 on a brand name version, as long as the cable is undamaged the result will be identical. However before anyone starts getting on their high horse, we will add a couple of caveats. Firstly if you spend a bit more on a nice cable then you'll obviously get a better build quality but, whilst this may be aesthetically pleasing, it won't make any difference to the image quality over short cable runs (less than five metres).

However higher quality cables will make a difference over longer cable runs, where a better level of construction will help with transmission of the electrical signal. In reality, HDMI isn't a particularly great standard for transmitting video over long distances and any custom installer will undoubtedly use alternatives like Cat5/6/7 in these circumstances and just use HDMI for shorter runs. It's also worth remembering that the kind of problems you'll get with long HDMI cables will be 'sparkles', image break-up or no picture at all; they certainly won't be subtle differences.

Another factor to be aware of is that within the HDMI standard there are a number of different types of cable intended for different purposes. So under the current HDMI 1.4 specifications there are two types of cable - Standard and High Speed. A Standard cable can handle up to 1080i and 720p, whilst a High Speed Cable is rated for 1080p, 4K, 3D and Deep Colour. So assuming you want to get the best out of your HDMI cable and ensure you avoid any issues, make sure whatever cable you're using is rated High Speed.
Whilst build quality is important over long cable runs, any undamaged high speed HDMI cable under five metres will be identical to any other.
Right now we've got that out of the way, let's take a look at the science behind HDMI cables. First of all HDMI is a digital standard, which means it is transmitting an electrical current composed of ones and zeros, as opposed to an analogue waveform. This means that a digital signal can be transmitted with a much higher degree of accuracy than an analogue signal and is less susceptible to impedance. This is a tendency for cables to resist the current as it flows through the wiring. The better the construction of an analogue cable, the less of an issue there is with impedance. This is also the reason why build quality is important for HDMI cables that are working over longer distances.

However unlike analogue signals, a digital signal has a clearly defined waveform composed of ones and zeros. The receiving device knows it is looking for ones and zeros and thus has a high degree of tolerance, since it can correctly identify if it is receiving a one or a zero. The receiving device can also, if necessary, interpolate what it should be receiving based on other information. It's this ability to recognise the signal and reconstitute the data that makes digital transmission so effective and robust.

It's also the reason why any undamaged high speed HDMI cable under five metres will be identical to any other. If there is a problem, either due to damage or impedance, the affect on the image will be very noticeable. There's absolutely no way that the cable itself can make subtle improvements to the image because the signal is only composed of ones and zeros. All it can do is transmit that data from the source to the receiving device and the image will be perfectly reconstituted every time.

A digital signal is composed of ones and zeros, which means that there's no way an HDMI cable can make subtle improvements in image quality.
Here at AVForums we have an HDMI cable testing feature on our Sencore MP500 Multi-media signal generator and we have never found any difference between any high speed HDMI cables under five metres, regardless of cost. We have also measured different priced HDMI cables in terms of their greyscale, gamma and colour accuracy and again, there's absolutely no difference between a £5 HDMI cable and a £100 HDMI cable.

We have recently been using High Speed HDMI cables with Ultra HD Blu-ray and have found on occasion that cables we thought were rated High Speed have struggled with a full Ultra HD 4K signal. Its possible that these cables weren't quite as High Speed as they claimed but with a Full HD signal over a run of less than 5m they worked without any problems. However faced with a full 18Gbps bandwidth signal they struggled and the problem usually manifested as a loss of image.

To combat this issue the Premium HDMI Cable Certification Program has been launched, which encompasses additional and enhanced cable testing as well as an authentication and verification program. Cables are tested to ensure they support the full 18Gbps bandwidth from the HDMI 2.0b specification, including 4K/60p, BT.2020 and HDR, plus an EMI test to ensure cables minimize interference with wireless signals.

Consumer groups have also done extensive testing of the data transmitted down to a pixel level, as well as blind-blind comparisons with user groups, and there is absolutely no difference between different high speed HDMI cables. However if you think about it, the truth is obvious. It's a digital signal composed of ones and zeros, so you'll either get an image or you won't. It's physically impossible for the construction of the cable to make subtle improvements in image quality. As a result over the last couple of years, HDMI cable manufacturers have been prevented from making such claims in their advertising.

Why does the myth endure? Thanks to misleading information from HDMI cable manufacturers, reviewers and retailers.
Given all this, why do people still believe they'll get a better performance out of an expensive HDMI cable? Well partly it's a throw-back to analogue, where better quality cables can make a difference to performance; although how much is often debatable. The placebo factor always plays a part in these things, even where digital cables are concerned. There's also been some very misleading reviews in publications, where claims have been made that are, quite frankly, physically impossible.

However, the biggest source of misinformation comes from certain retailers, where the sales staff are told to push expensive HDMI cables on customers. Why do they do this? Well, as we've already discussed it isn't because it improves picture quality. However the margins on these expensive cables are sizeable and that's the reason stores are so keen to sell them. We've even witnessed stores connecting one TV with an HDMI cable and one with a composite cable, to show apparent 'improvements', so be wary of such sales tactics.

You can't really blame them, in the cutthroat world of consumer electronics, a store might make more on the HDMI cable they've just sold you than they will on the TV you've just bought. So before you buy an expensive HDMI cable, stop and think. Remember what we've said about the science behind a digital signal. Remember that the glowing review you just read online or in a magazine might be for a cable manufactured by a major advertiser in that publication. And remember that the fresh faced youth recommending you get an expensive HDMI cable is thinking of his commission.

At the end of the day it's common sense, you wouldn't spend £100 on a USB cable so why do so with an HDMI cable? Ultimately that one metre high speed HDMI cable that came in the box with your Blu-ray player will likely do the job perfectly.