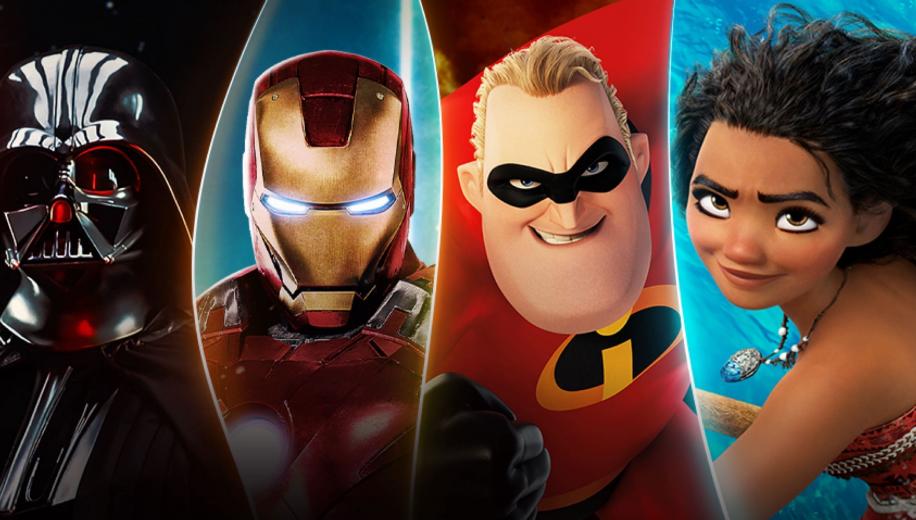 As Disney+ finally launches in the UK - possibly booming due to the enforced isolation - we take a look at some of the best content available to UK audiences on this new platform, prioritising original content not necessarily because it's better, but because it's new.

It's going to be top of the list for many, but really these are old shows which have been in syndication for years, and played out on various channels (in any order they see fit) over the decades. Nonetheless, the opportunity to watch every episode of every season of classic shows like The Simpsons may well be one of the biggest - if not the biggest - draws of this new platform. With a reported 300 seasons of various TV shows to work through, there's surely something nostalgic for everyone.

Amidst the 500 movies that are reportedly available on Disney, there are a boatload of classic features, as well as not so classic features which fit the broad superhero / fantasy ambit that Disney go for, including the likes of Tomorrowland, Avatar, National Treasure and the Pirates of the Caribbean movies, as well as more nostalgic offerings like The Rocketeer, The Love Bug, Freaky Friday, Splash, Who Framed Roger Rabbit, and Turner & Hooch, and inspirational sports fare like the superb Denzel Washington drama Remember the Titans, and the underrated Costner effort, McFarland USA.

Well it is Disney, so there's everything from their Disney range across the years, including Frozen (but not Frozen II until 17th July 2020) and Moana, and going as far back as the 20s for Steamboat Willie, as well as including related content like the Tangled and Big Hero 6 TV shows. The live action catalogue is there too - Maleficent and the new Mary Poppins, Lion King and Aladdin are all there - as well as Tron, Tron: Legacy (and, finally, the excellent Tron: Uprising anime).

Everything Pixar is present and accounted for, up to and including Toy Story 4, with modern gems worth revisiting like Inside Out, Coco and The Good Dinosaur, as well as classics like Wall-E, Incredibles and Up. That's not to mention the numerous shorts attached to each and every one of those movies, as well as a bevy of new 'Original Shorts' that are worth checking out.

Recommended: (at least for those who've watched ALL the Pixar movies) Original Shorts

Of course a huge draw for those who haven't collected it already is the mammoth Marvel Cinematic Universe, affording almost every single entry in the MCU (Spider-Man: Far From Home must be held back due to some kind of rights issues), as well as recent acquisitions like the X-Men movies, and all the TV shows too (Agents of Shield, Agent Carter and Runaways), including the animated ones (classic X-Men, Ultimate Spider-Man, Spider-Man Unlimited, Spider-Woman and absolute cult classic Spider-Man and his Amazing Friends, as well as Silver Surfer, classic The Incredible Hulk, and Iron Man).

Recommended: (at least for those who have watched the ENTIRE MCU) Spider-Man and his Amazing Friends.

Just ahead of the 4K release, many fans will be interested in revisiting the original trilogy in 4K finally, complete with Dolby Vision, and for completists there's everything here, from the main core movies (notwithstanding the imminent Rise) to Solo and Rogue One, as well as a bunch of Lego Shorts, and animated shows.

Recommended: Rogue One in Dolby Vision.

There are a number of Original TV Shows, two of which are big enough to warrant their own entries, primarily because they stand out from the likes of High School Musical: The Musical: The Series (yes, that's really a title). Diary of a Future President looks slightly more tolerable, but the reality is that if you're not a kid, The World According to Jeff Goldblum (and much of the rest of the National Geographic content) is going to be your only option.

Recommended: Goldblum. Who can resist Goldblum deep-diving into the world behind the world we live in?

Lady and the Tramp never got a cinema release, headlining Disney Plus as a flagship original movie, and it's an expensive-looking production (the effects are outstanding - where did White Fang go wrong?) even if it's not up there with the rest of their live action remakes of classics (or, worryingly, perhaps it is). The Willem Dafoe-starring Togo possibly looks even more White Fang-esque, affording more frozen canine adventures, and the coming of age Star Girl looks suitably inspiring for young or pre-teens.

2. The Clone Wars - The Final Season

Easily one of the biggest highlights for the channel is not actually the Star Wars film series in 4K - which fans will inevitably want on hard media and those not bothered won't particularly be impressed by here - but actually the Clone Wars, which is available in its entire excellent run, charting an exquisite expansion of one of the most interesting and previously underserved eras in the Star Wars timeline, and starting off with the Clone Wars movie too, and which Disney Plus have commendably commissioned for a final season - the first two excellent episodes of which are available on launch. Superior animation, great little mini-tales - Star Wars fans should get on this ASAP.

Recommended: If you haven't already, go back and watch the whole series from the start.

And here's the big one. Really, Disney nearly dropped the ball completely by delaying the release of Disney Plus and thus the release of this eagerly anticipated flagship series. It proved so popular that people went out of their way to try and hunt it down, but the timing of the UK launch has likely actually abated any potential drop-off here, and even those who have already seen it should watch it in all of its Dolby Vision glory here. Superbly constructed, and oozing classic OT style, this is a wonderful space western show, seeing Jon Favreau (whose enthusiasm kick-started the MCU with Iron Man), deliver up a wonderful new mini-universe which is likely to be thoroughly expanded on from here on out (with rumours of a movie spin-off and of Rosario Dawson's perfect casting as the first ever live action incarnation of a fan-favourite Jedi character from the animated shows). Many may be grateful that the films have finally come to an end, but few won't be eagerly anticipating the release of the second season of this show, hopefully later this year.

Recommended: Well, only the first two episodes are available on launch, but watch them back-to-back for a better experience.

Movies Leaving the BBC iPlayer by the End of May

What's new on Amazon Prime Video UK for May 2020