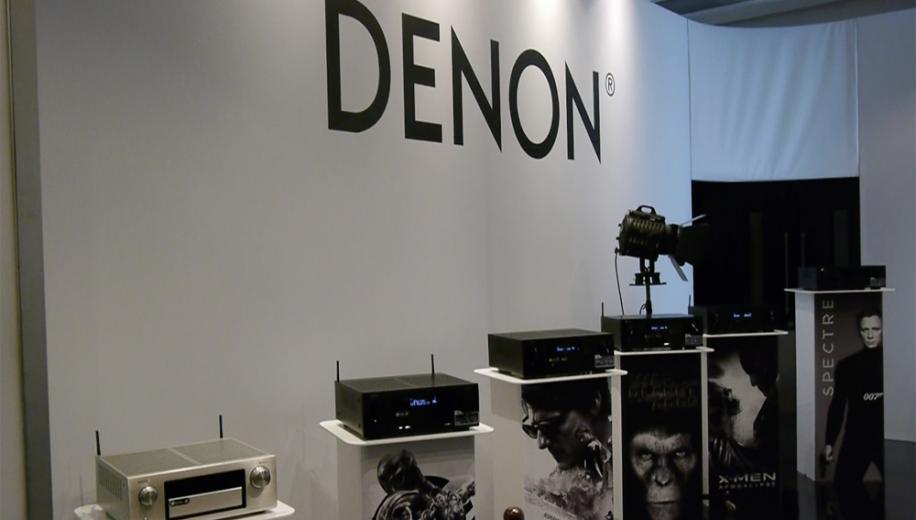 Denon faces an interesting problem this year. Last year's line-up of AV Receivers had so many features that the manufacturer is struggling to find anything new to add in 2016.
Of course, Denon have managed to find a few more features to add to this year's models but their focus has very much been on improving the overall performance, as the manufacturer seeks to consolidate its market leading position in 2016. So what can you actually add to a range of receivers that already has Dolby Atmos, DTS:X, Auro-3D and Audyssey EQ, along with support for 4K Ultra HD, HDCP 2.2, High Dynamic Range and the BT2020 colour space; not to mention built-in WiFi and Bluetooth, support for Spotify and a handy new remote app.

Well, first of all, Denon have made refinements to their excellent AVR Setup Assistant, making it even easier to setup and get the best from your new AV Receiver. It's easy too forget how daunting many consumers find an AVR and Denon's Setup Assistant is the best and most intuitive version we have tested. Denon have also upgraded many of the audio components in their receivers, n order to improve the overall sound quality, whilst also tuning them to enhance the overall performance.

Denon are also adding their HEOS multi-room system into two of their latest AV Receivers, not only allowing owners to use the AVR as part of a network of devices but also adding access to Tidal, Napster, Deezer, Soundcloud and TuneIn. The HEOS app will built into Denon's mobile app, allowing users to move from the remote app into the HEOS app and back in one seamless experience. The result is an unprecedented level of control, not only for the receiver, itself, but also your entire HEOS network.

Another feature added for 2016 is support for the new Audyssey smartphone app. As Audyssey Pro is phased out, this app will provide many of the same features in an easier to use fashion, making it accessible to consumers as well as custom installers. The app will guide the user through the Audyssey calibration, using the included Audyssey microphone for auto-calibration. The app will also allow the user to check correction results, set target sound options, adjust frequency roll-off, set mid-range compensation controls and save/load/view/print results. The new app will be available from app stores in October for a cost of €19.99, which is considerably less than the old Audyssey Pro kit. Although the award-winning AVR-X7200WA remains the flagship Denon AV Receiver for 2016, the manufacturer is also launching a new high-end model that not only includes all the new features mentioned previously but also increases the number of built-in channels. The Denon AVR-X6300H has 11 channels of amplification built in, allowing you to run a full 7.1.4-channel immersive audio setup from a single box. The new receiver is rated at 205W for all 11 channels and includes 11.2-channel processing, as well as 13.2-channel pre-outs. In terms of audio performance, the X6300H includes DDSC-HD with AL24 Processing Plus and high performance 192kHz/32-bit DACs. The AVR supports Dolby Atmos, DTS:X and Auro-3D (with an optional upgrade) and includes Audyssey MultEQ XT32/LFC and the new Audyssey App. There are 8 HDMI inputs and 3 HDMI outputs with support for 4K, HDCP 2.2, HDR and BT2020, as well as built-in WiFi (2.4 and 5GHz) and Bluetooth. There is support for Spotify Connect, AirPlay, DSD, Hi Res Audio and gapless playback, as well multi-room capability thanks to the integration of HEOS. The AVR-X6300H will be available in either black or silver-gold, it will be launched in October and has a suggested retail price of £1,899.
The new X6300H not only has an impressive feature set, including the addition of HEOS, but 11 channels of built-in amplification as well
The next AV Receiver in the new 2016 line-up is the AVR-X4300H, which includes many of the same features as the X6300 but only has 9 channels of built-in amplification. This does mean that you'll need to add two more channels if you want to run a full 11-channel configuration but, otherwise, the X4300H is almost identical with the only major difference being the loss of two channels of amplification and the fact that the receiver is rated at 200W per a channel. How important those extra two channels are will depend on your circumstances but the AVR-X4300H will also be available in either black or silver-gold and launches in October but with a suggested retail price of £1,199.

Then we have the AVR-X3300W which loses another two channels of built-in amplification, doesn't have HEOS integrated into its platform and doesn't support Auro-3D. Otherwise it's a very well specified receiver, with the 7 built-in channels rated at 180W per channel and support for Dolby Atmos (limited to a 5.1.2 configuration) and DTS:X (with a future firmware update). There's also built-in WiFi (2.4 and 5GHz) and Bluetooth, along with Spotify Connect and AirPlay. There's Audyssey MultEQ XT32/Sub EQ and the new Audyssey App, along with 8 HDMI inputs and 2 HDMI outputs with support for 4K, HDCP 2.2, HDR and BT2020. The AVR-X3300W comes in black and will be available in August at a suggested retail price of £749.

Finally, there's the AVR-X2300W, which offers a similar specification to the X3300 with 7 channels of built-in amplification rated at 150W per channel. There's also support for Dolby Atmos (limited to a 5.1.2 configuration) and DTS:X (with a future firmware update), along with built-in WiFi (2.4 and 5GHz) and Bluetooth. In addition the X2300W includes AirPlay, Spotify Connect, Gapless HD Audio and DSD 2.8 and 5.6MHz streaming. There's also Audyssey MultEQ XT and the new Audyssey App, along with 8 HDMI inputs and 2 HDMI outputs with support for 4K, HDCP 2.2, HDR and BT2020. The AVR-X2300W comes in black and will be available in June at a suggested retail price of £499. The market for multi-room systems has been increasing steadily over the last few years, so it's no surprise that Denon has placed a great deal of emphasis on their HEOS brand. However, the idea of 'HEOS by Denon' as a separate brand will gradually be replaced by the concept of HEOS being integrated into Denon products, much like Yamaha's approach with MusicCast. This process has already started with HEOS being integrated into both the AVR-X6300H and AVR-X4300H. However, there will still be a full range of HEOS products available and Denon even plan to launch a HEOS AVR that will combine both multi-channel and multi-room into a single lifestyle product.

The main unit is very minimalist in design, using a slim-line chassis with only a volume dial on the front. There will be a simplified remote, with most of the control handled by the HEOS app, and the receiver will support 5.1 channels. In the demo that we saw, the AVR was running three wired channels at the front, along with a subwoofer and was using a pair of HEOS 1 speakers as wireless rear channels. However users will be able to run a fully wired setup if they prefer. The exact release date of the HEOS AVR hasn't been announced yet but it is expected to retail for around £999.

Denon have also added built-in Bluetooth to all the new HS2 models, allowing a USB port to be used for mass storage devices. Other improvements include Wireless AC standard in addition to a, b, g and n for greater WiFi range and increased throughput; and higher clock speeds and four times as much memory for improved response times and throughput. We were impressed by HEOS when we reviewed it last year, so it will be interesting to see what improvements these latest changes actually make to performance.

Denon certainly have another strong AV Receiver line-up for 2016 and if they can successfully combine all those features with an even better performance, then they should have no problem retaining their market lead.