Datasat launch the LS10 with Auro-3D

Datasat and Auro take film sound to the next level 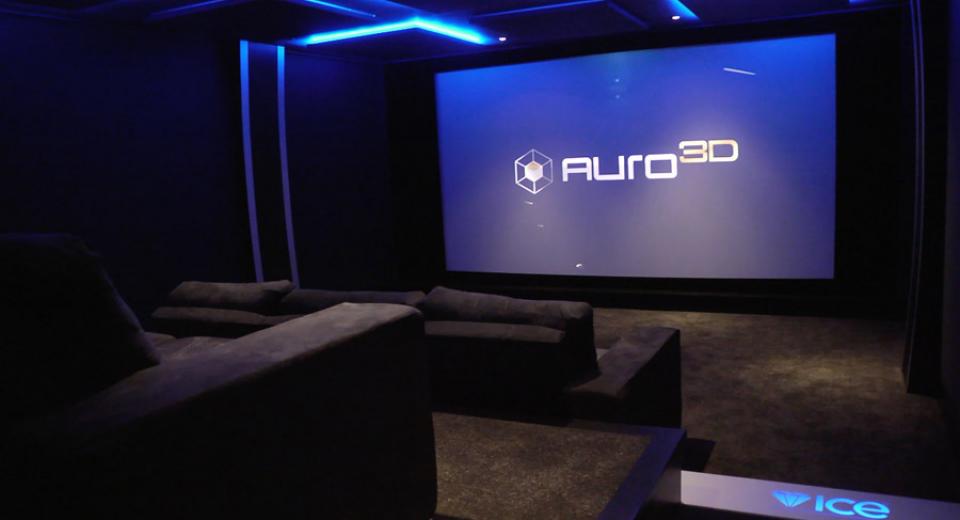 In fact, despite numerous recent advances in filmmaking, the audio side has remained largely unchanged since going digital in the 90s. Yes some films have been released with 7.1 soundtracks but basically most films are still mixed and presented in good-old 5.1-channel surround. However all that is about to change, with both industry giant Dolby and newcomer Auro about to go head-to-head for dominance of the next generation of film audio. We have already covered Dolby’s new Atmos format in some detail and those wishing to know more can read about it here.

Auro, however, is a name you might not be so familiar with, so before we discuss the technology, here’s a little background. The concept of Auro 3D was established back in 2005 by Wilfried Van Baelen, the CEO of Galaxy Studios and Auro Technologies. What Wilfried realised was that in 24-bit PCM recordings, 4-bits were consistently under-used and this evolved into a new audio codec that allowed for many more lossless channels to be stored within PCM audio tracks. The clever aspect about Auro-3D isn’t just that it adds more channels including additional height channels and an overhead channel but that it does so by using existing technology. The additional channels are carried within a standard 5.1 or 7.1 PCM soundtrack, which means that Auro-3D is fully backwards compatible and can be easily implemented. Initially Auro-3D was developed for use in the cinema in conjunction with Barco who were already providing professional digital projectors. This sound format is marketed under the not-so-catchy brand name ‘Auro 11.1 by Barco’ and has been designed to establish an 11.1-channel standard for use in professional cinemas, although the format also offers a 13.1-channel version.

The clever aspect of Auro-3D isn't just that it adds more channels, it's that it does so by using existing technology.
Auro’s approach is to use additional height speakers above the usual front, centre and surround speakers to increase the number of channels to ten. There is also the ‘Director’s Voice’ (sometimes referred to as the ‘Voice of God’) channel which sits directly above the audience, along with the usual Low Frequency Effects (LFE) channel. The result of this approach is to create a sonic sphere around the audience with sound in three distinct layers.

First there’s the lower layer, which is composed of the standard front, centre and surround channels, where ear level sounds are created. Then there is the height layer, composed of the height speakers, which is the most important layer in terms of creating a more immersive experience. This is because this layer represents ambient reflections that give the brain audio cues relating to the size and context of the environment. Finally there is the top layer, which is situated directly overhead, creating fly-over effects and combining with the height layer to create an umbrella of sound.

The reasoning behind the development of Auro-3D is that the subconscious mind is highly sensitive to sound origins and character. As a result we expect a high degree of auditory coherence between sounds in order to register them as genuine. Since we instinctively sense when sound information is inauthentic, recorded audio only sounds 'life-like' to the human ear when it maintains a full, natural consistency. True immersion is achieved when an audience is offered a natural auditory spread that replicates the dimensional nature of sound in real life and the brain has evolved to listen for sounds at what would be tree level. The experience then becomes not only more realistic but also less fatiguing because the brain doesn’t have to make assumptions about the context of specific audio cues.

Currently there are no cinemas in the UK that have been converted to Auro-3D but there are hundreds worldwide and it's only a matter of time before there are suitably equipped cinemas here too. There is also a growing catalogue of titles and the first film to be mixed with an Auro-3D soundtrack was Lucasfilm's Red Tails. Since then there have been number of other films from a variety of different studios including Dreamworks Animation who recently released Rise of the Guardians, Turbo and The Croods in Auro 11.1 by Barco, Sony who released Elysium, Lionsgate who released The Hunger Games: Catching Fire and Ender's Game and Disney who released Oz the Great and Powerful. Upcoming films that will have an Auro-3D mix include I, Frankenstein, Occulus, How to Train your Dragon 2 and The Amazing Spider-man 2.

The format is designed to provide superior sound quality through the use of three layers delivered via uncompressed PCM audio. All the advantages that make Auro-3D so easy to install in professional cinemas, apply equally as well in the home and since Auro-3D uses PCM it can be delivered via Blu-ray. In fact it's fully backwards compatible, allowing it to still deliver a standard 5.1 or 7.1 mix and it can be used in conjunction with HDMI and existing Blu-ray players. All that is needed to implement Auro-3D in the home is a Blu-ray with the Auro-3D channels encoded in the PCM tracks, a suitably equipped processor, enough channels of amplification and the necessary speakers. When the time came to implement Auro-3D in the home, Datasat were the obvious choice as a partner. Auro already had an existing relationship with Datasat through their shared experiences working on the cinema format with Barco. In addition, Datasat had begun to move into the consumer electronics market with their reference status RS20i processor and RA7300 amplifier. Since the RS20i processor is essentially a consumer version of the company’s AP24 cinema processor, implementing Auro-3D on it was also a natural progression. The RS20i has the horsepower, flexibility and number of channels to easily handle the more immersive Auro-3D format. Auro-3D is being added to the RS20i as an update but Datasat also wanted to have a product that covered the mid to high-end area of the market, so they have just announced the LS10.

This new processor shares the same audio quality found on the more expensive RS20i but drops Dirac Live and eliminates some of the flexibility of the RS20i, which just wouldn't be used by most consumers. The LS10 can handle Dolby TrueHD and DTS-HD Master Audio at 5.1 and 7.1, along with DTS Neo:X at 11.1 and Auro-3D up to the 13.2-channel configuration. There are 15 balanced XLR outputs, bass management, 10-bar parametric EQ and the ability to use stereo subwoofers. At the rear there are 8 HDMI inputs and 2 outputs, which are currently Version 1.4 but will be upgraded to Version 2.0 once it has been finalised. There are 2 Toslink and 2 S/PDIF inputs, along with 2 pairs of analogue stereo inputs using BNC connectors and a USB port for audio streaming. The LS10 uses a built-in display screen and now includes a remote control. The LS10 will begin shipping at the end of the first quarter and the version without Auro-3D will cost just under £10,000. There will be a premium of around £2,500 for the version with Auro-3D, although the exact pricing hasn't been finalised yet. The launch was held at Genesis Technologies head office in Bracknell, which is the first place in the UK to have a full Auro-3D installation and they arranged for AVForums to get an exclusive demonstration. This started with a recording of ambient noise in a square in Amsterdam which gave an example of how Auro-3D is able to use audio cues to create a genuine sense of space. It then moved onto a layered 9.1 recording of the countryside where birds could clearly be heard chirping high up in the trees and overhead. Then there was a series of fly-bys, one involving a plane and the other with two helicopters and here the 'Director's Voice' channel was used and the aircraft could clearly be heard moving directly overhead. After that there were some clips from the Dreamworks Animation films The Croods, Turbo and Rise of the Guardians, followed by a dogfight sequence from Red Tails and a bombing raid from a Dutch move called The Blitz.

The latter two, in particular, were effective for demonstrating explosions overhead, fly-bys, gunfire, falling bombs and general debris ricocheting all around. There was no doubt that the Auro-3D demonstration represented a highly immersive experience but it was also clear that the effectiveness of the soundtrack will largely depend on the skill of the sound designers. It will also depend, to a certain extent, on the film itself, as something like a dogfight is likely to be more effective in Auro-3D than a kitchen sink drama. However the sense of spacial awareness will undoubtedly improve any soundtrack, as demonstrated by an orchestra playing in a concert hall where the sense of three dimensional space was quite apparent. However, the £800,000 demo room at Genesis Technologies is so good that we suspect anything including a bog-standard 5.1-channel mix would sound great in there, so the only real way to judge would be to watch an entire film twice - once in 5.1/7.1 and once in 11.1/13.1 - then compare the experience.
Auro-3D certainly delivers an immersive experience, whether this will be enough to convince people to convert remains to be seen.
The combination of Auro-3D and Datasat hardware is currently aimed at the middle to high-end part of the market and specifically custom installations and we're sure that they will be successful in that segment. The real question is how long before the technology filters down to more affordable products and how easy it is for people to convince their significant others that they need additional speakers. Auro are quick to point out that the most benefit can be gained from adding four height speakers, which would go above the front and rear speakers, thus not really taking up any more space and that is a valid point. The other key to success is going to be availability of content and that will depend on how many studios are prepared to support Auro-3D in their Blu-ray releases.

Since Blu-ray itself is undergoing a transition to 4K Blu-ray, this would seem like an ideal opportunity to update the audio side as well as the video element of the disc and here Auro-3D has a major advantage. It's ability to be encoded within the existing PCM tracks that are already included in the Blu-ray specifications makes it much easier to implement than the competition. Currently Dolby's objects based Atmos is facing direct competition from DTS's Multi-Dimensional Audio (MDA) format that is not only objects based, as well, but also open and royalty-free; no doubt to rain on Dolby's parade. Whilst Auro-3D can also use objects, it is largely agnostic as to which of the two objects-based formats wins out, as long as they have PCM audio tracks to encode the Auro-3D channels within. Whilst much will depend on the level of cinema adoption and studio support, Auro-3D's simplicity and compatibility may well put it in the best position to survive the coming battle for the hearts, minds, and especially ears, of film lovers everywhere.
To comment on what you've read here, click the Discussion tab and post a reply.
Share:
Facebook Twitter Reddit Pinterest Tumblr WhatsApp Email Share Link
Article Specs Discussion (10)