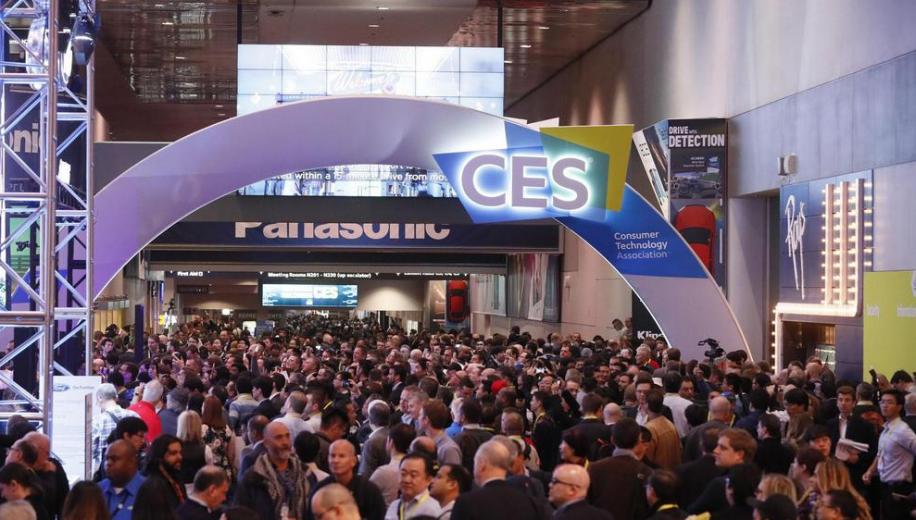 It’s CES time again and 2018’s event promises to be the biggest and best yet with more exhibitors and floor space occupied than ever before.
As ever, we’ll be out in Vegas with cameras in hand and we’ll be bringing you the latest news and video reports direct from the show. This last year has been all about High Dynamic Range video and we don’t expect that emphasis to shift too much although we’re hoping for some interesting and exciting developments to unfold in the realms of TV technology. In a general sense, the marketeers will still be touting bigger and better numbers for HDR performance with more Nits (brightness), wider colour spaces and hopefully, in terms of LED LCD TVs, improved full array local dimming (FALD) systems.

Samsung hasn’t had the best of 2017, in terms of the high-end television market, with their QLED (LCD) TVs failing to gain the level of sales that previous generations have enjoyed. Much of that is down to the fact that OLED technology has become the de facto option for the enthusiast market but Samsung, after something of a false OLED start, are reticent to embrace it.

Withering sales are always sure to gain attention, however, and it might just be that Samsung will have something genuinely new - and not a rebranding of an existing tech - to show us in Vegas. According to the Korean press, Samsung will be touting Micro-LED as the next big thing in TV technology with a prototype 150-inch set to get the ball rolling. The Micro-LED technology is a miniaturisation of the company’s Cinema LED screens launched during 2017. Like OLED, it’s a self-illuminating technology but promises longer life-span, better resistance to burn-in or image retention, an even lighter weight and lower power consumption while being able to illuminate more brightly, which will be a good for HDR performance. We’re not necessarily expecting Micro-LED to become a true commercial proposition in 2018 but, going forwards, it could be a bit of a game changer.

Samsung is also known to be working on emissive Quantum Dot technology. Quantum Dots are microscopic molecules that when hit with specified amount of light, will illuminate in any way, and in any colour, that you want and they’ve been helping TVs to produce wider colour gamuts for a few years now. If they can be made to viably work without any backlight assistance they should outdo OLED in terms of colour space and we might see TVs getting close to hitting the (ultra-wide) Rec.2020 standard. It’s not clear whether Emissive QD and Micro-LED are tied at the hip, at this time, but hopefully we’ll find out soon enough.

In a similar vein, Sony might well revive its CLED (Crystal LED) technology that we first saw at CES 2012. Like Micro-LED, CLED was heralded, by Sony, as being a step up on Organic LED (OLED) TVs, given its longer shelf life and higher peak brightness. Crystal LED is also a self-emitting technology, like OLED, meaning it requires no backlight - and the associated issues that come with that - in addition to the display being able to go totally black and thus produce outstanding contrast performance.

Given the success that LG is currently enjoying with OLED, there’s no reason to expect that won’t be its main focus of CES 2018. The manufacturer said that it will release its first 8K Ultra HD OLED TVs in 2019 and that it intends to increase sizes to 80-inches and beyond so we wouldn’t be too surprised if they pulled out a whopper, so to speak, this time around. It seems certain that something we will see in 2018 is an LG OLED with a screen acting as the speakers, much like Sony’s A1, called a Crystal Sound OLED.

Given the perilous nature of the market for TVs, it’s largely been left to the big two (Samsung and LG) to put the serious money into R&D investment so it’s left others looking for ways to put their own twists on the Koreans’ concepts. This is especially the case for LG Display with its monopoly in the field of OLED TV screen production. The likes of Philips, Sony, Panasonic and Vestel all source their panels from LG Display and it’s perfectly possible we’ll see more budget brands jump aboard the OLED express. We’re thinking perhaps Hisense and maybe TCL who, incidentally will be joining Hisense as a major Chinese manufacturer in the UK market in 2018.

Format wars – you gotta love ‘em or not, as the case maybe – but we’re already seeing something of one emerging in the world of HDR with Dolby Vision and HDR10 vying for supremacy. There’s no doubt Dolby Vision holds technical advantages over HDR10, especially in terms of being able to deliver HDR metadata on a scene by scene basis, but HDR10 Plus promises to match that selling point while being an open source – i.e. free – HDR format; Dolby charges licensing for Dolby Vision, of course. HDR10+ is a Samsung creation but Panasonic and Philips have already given their backing while content creation and delivery support comes from 20th Century Fox and Amazon; although what effect Disney’s takeover of Fox has on proceedings remains to be seen. That said, we wouldn’t be at all surprised to see some manufacturers to have both Dolby Vision and HDR 10+ compatibility in their 2018 TVs with HLG also seeing increased – possibly universal – support. What would really be a shot in the arm for HDR10+ would be inclusion of it as an optional format in Ultra HD Blu-rays spec and for owners of Samsung, Philips and Panasonic TVs, we hope that it happens.

Something that very much is part of the Blu-ray spec is High Frame Rate (HFR) Video and while we’re nowhere convinced it’s a good choice for films, it will have undoubted benefits in terms of video, especially with sports broadcasts and other fast paced content. At the present time, 4K content is pegged at a maximum of 60 frames per second, while HFR can take that up to 120 FPS. LG has already shown off some prototype HFR TVs and we’re hopeful they’ll announce suitably equipped models for retail in 2018.

Tied in with delivering HFR in Ultra HD is the launch of HDMI 2.1, which has recently been officially specified. HDMI 2.1 brings many other future-proofing benefits with it, too, including resolutions up to 10K, eARC which will allow HD and immersive audio formats to be passed via a single HDMI cable from the TV and Dynamic HDR on a frame by frame basis. HDMI 2.1 is also good news for gamers with support for Variable Refresh Rate (VRR) which reduces or eliminates lag, stutter and frame tearing; Quick Frame Transport (QFT) which reduces latency for smoother no-lag gaming, and real-time interactive virtual reality. We’ll be honest in saying that it's unlikely we'll see any HDMI 2.1 capable TVs at CES 2018 but you never know.

There’s certainly lots to look forward to at CES 2018 and we can’t wait for it to kick off. We’ll be there for all the previews and press days so coverage will start in earnest from the 7th when CES Unveiled launches and we’ll be covering all the press conferences of interest from Monday 8th January, onwards. Following that we’ll be getting closer to all the new tech on the showfloor for the remainder of the week so, Viva Las Vegas!