Chinese manufacturers Hisense, TCL and Konka give the big boys a run for their money 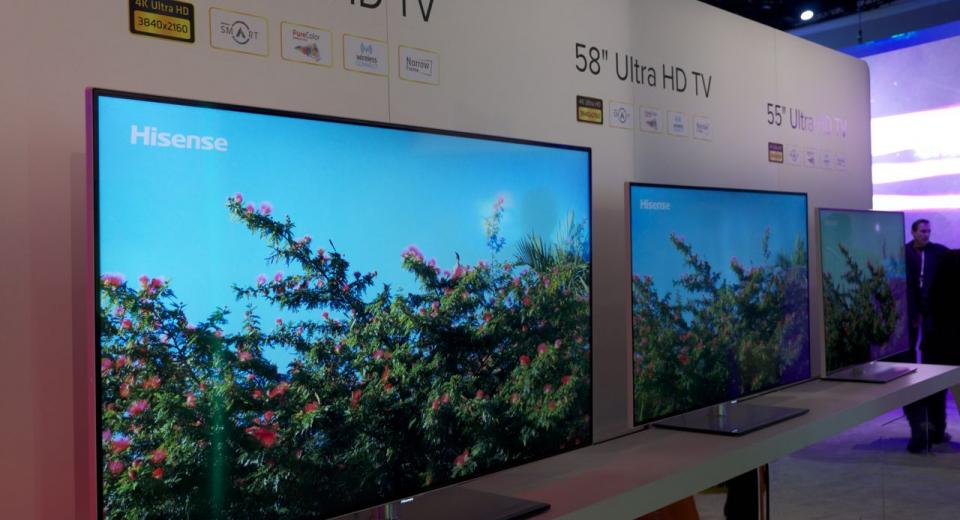 As we walked around the huge stands for LG and Samsung at this year’s CES, we realised there was a time when the Korean manufacturers were considered inferior to their Japanese competitors.

How things have changed and now LG and Samsung dominate the TV market whilst the big Japanese names are struggling to even remain relevant. However the South Koreans had better not get too complacent because China’s emergence as a global economic power means it can only be a matter of time before their consumer electronics companies begin to have a similar impact. In fact if CES 2014 is remembered for anything it might well be as the year that the Chinese manufacturers truly arrived and if one company can be seen as leading the way it’s Hisense.

It's only a matter of time before the Chinese TV manufacturers begin to have an impact.
Their stand occupies the space previously used by Microsoft and walking around there was nothing to differentiate it from those of the more established companies. It was large, slick and professional with an excellent selection of cutting edge TVs that looked just as good as the more familiar brands. Naturally Ultra HD 4K TVs took pride of place, with the Chinese manufacturer showing a number of screen sizes including 55, 58 and 65 inches. There was even a huge 85-inch Ultra HD TV that was clearly the Hisense flagship model for 2014. All of the TVs mentioned so far are flat but it would appear that even the Chinese aren’t immune to a spot of screen bending and thus Hisense also had a 65-inch curved Ultra HD TV. As with all the Ultra HD TVs currently available, these models use LED LCD panels with edge lighting but based on the demos we saw the backlights appeared quite uniform. In fact the TVs had plenty of features with smart platforms, narrow bezels and wireless connectivity. Hisense also have their Pure Colour Reproduction for a wider colour gamut, along with their proprietary Ultra Dimming feature and faster response times.

Unlike many of the big boys, Hisense had a Full HD OLED on display and it looked good. Unlike many of the big boys, Hisense even had a 55-inch Full HD OLED TV on show and although they said it was still in development it looked ready to launch as far as we could see. We watched a number of demos on the Hisense OLED and saw the same kind of superb images that we saw on OLED screens from both LG and Samsung, so there is nothing to suggest that this Chinese manufacturer is technically inferior. As if to proof the point Hisense also had a prototype 55-inch Ultra HD TV with glasses free 3D, although as with the similar in development TV that Samsung were showing the resolution was only around 720p. Not to be outdone, fellow Chinese manufacturer TCL also had an extensive selection of Ultra HD TVs including an 85-inch version that utilises cutting edge tech like Dolby Vision. There was also a 65-inch curved Ultra HD TV and a 110-inch model that looked suspiciously like Samsung’s current flagship. Well they do say imitation is the sincerest form of flattery. TCL also had a 55-inch OLED Full HD TV which, unlike Hisense, they plan to release soon. Again, all the demo material at the TCL stand looked excellent and there really was nothing to distinguish their performance from that of the more famous brands.

TCL had an Android based smart platform with Google Play and Roku TV. TCL also seemed to be ahead of the game when it came to smart features and had an Android powered Ultra HD TV that included Google Play applications. The TV uses Android 2.2, has dual-core processing, WiFi, YouTube, Chrome, Voice Search, a Smart User Interface and TCL’s own App Store. Philips announced a similar platform this week, so it would seem that the Chinese are keeping pace with their competitors. TCL even include Roku TV in their smart platform, giving users access to thousands of streaming channels. Finally there’s Konka, another Chinese brand busy displaying their latest models at the show and, once again, they had an extensive line-up of Ultra HD TVs in various screen sizes. They also had a 55-inch OLED Full HD TV which looked as ready to be launched as the one Hisense were demonstrating. We had a close look at all three of these Chinese brands and there appeared to be nothing wrong with the performance of any of their TVs. So if the pricing is as cheap as some sources are suggesting, the Chinese really could make a significant impact on the TV market in 2014.