For a regional show, Bristol still packs the new product in. 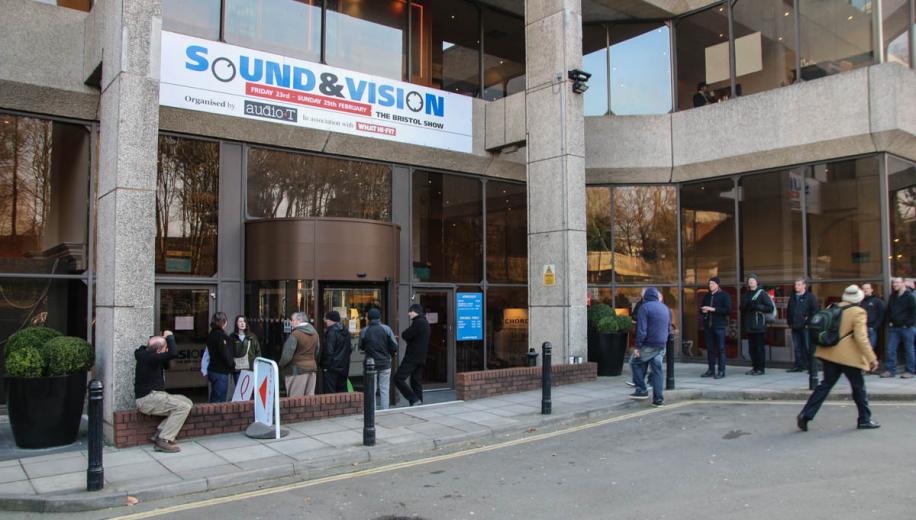 Barely has the dust settled from CES before we all decamp to the Marriot Hotel for another Bristol Sound & Vision show.

As has been noted in the past, by any logical calculation, Bristol shouldn’t ‘matter’ in the show calendar but for many manufacturers, it continues to be one of the preferred release points for new products. In recent years, the show has become more focussed on two channel over multichannel and AV but there was still an impressive spread of equipment on display. One thing that was abundantly clear over the course of the Friday was that attendance seemed to be very healthy this year and many of the timed demonstrations were busy from the start of the day to the end.

In terms of the product on display, the good news is that while some of it was (very) expensive, there was also a good selection of cost effective material being displayed as well. Some of the edited highlights are listed below. Having launched their Uniti products over the course of the last few months, Naim took the opportunity to show off three new streamers that will join the Classic range. The ND5 XS2, NDX 2 and ND 555 are replacements for the ND5 XS, NDX and NDS and bring some of the technology developed for Uniti to the Classic range. Most notably in the case of the two more expensive streamers, this means you now get a full colour display that can show more information in a rather smarter way than the old green on black design. The casework is also subtly tidied up and looks very good indeed. In the case of the entry level ND5 XS2 though, the display is completely removed and the streamer appears to be entirely dependent on the control app - something that will be an interesting test of stability. The streamers are not due on sale for a few months yet and there is currently no word on pricing. Having been out of the UK market for quite a while, Jamo has returned under the distribution of Henley Audio. This is good news because some of the products that have been launched look extremely promising. Of greatest interest for any fan of multichannel audio is the Studio 8 Series. This is a full range of speakers including three floorstanding models, two bookshelf designs, subs and an upward firing effects speaker. This latter speaker is a bolt on to the top of the floorstanders and makes for a very tidy installation. Most notable is the pricing. A five channel pack built around the largest floostanders is £825 meaning that an Atmos system would come in at a little over a grand. Just as importantly, although they were only running in stereo, the smallest S805 floorstander sounded excellent. With the LX series of speakers still amongst our favourite affordable speakers, Mission has shown the next tier of their plans for world domination in the form of the QX Series. Priced from around £300 and up, the QX series has three floorstanders, two standmounts, centre, dedicated effects speakers and a hefty active subwoofer. What is notable about the QX models is that while the LX models are tidy if unremarkable in design terms, the QX models look much smarter and feature some unusual design choices like aluminium top and bottom plates as well as wrap around style cabinets. Happily, the QX 2 sounded at least as good as it looked suggesting that this is going to be a very significant set of speakers indeed. 2017 was - by the incredibly prolific standards of the brand - a fairly quiet year for Pro-Ject but it looks like 2018 is going to be a busier one. Bristol was the first showing of the new Debut 3 S turntable. The S denotes a new S shaped tonearm that was designed and built entirely in house. This is partnered with a Pro-Ject exclusive cartridge, new feet and a new Pro-Ject logo that - it has to be said looks much smarter than the old one. This is a lot of turntable for £325 and the system that is was running with at the show of box components and the Jamo 805 sounded absolutely superb. Also on display was the new Juke Box which takes a turntable, adds an amplifier, line input and output, Bluetooth and a pair of speakers for an impressive sounding all in one. One of the most visceral demonstrations of the show came from Karma AV who combined some products that we saw at CES into a system that delivered trouser flapping power. The 4000 Series subwoofers from SVS combine enormous power with a driver that could stop small arms fire and the results were spectacular. Under the control of the enormous and ferociously complex Emotiva X Series 16 channel processor, the results were seriously impressive. The Emotiva is fully balanced across all channels and makes use of an Analogue Devices chipset that the competition won’t be able to make use of until next year. As an added bonus, they look properly menacing too. The ongoing battle to make the most extraordinary in-ear earphone going takes another twist as AKG chose to show off the N5005. This new flagship which costs a cool £1,000 has some features that we might expect from a high end earphone- five drivers per side which are a mix of armature and dynamic types, all mounted in an inert ceramic body. These are partnered with a selection of adjustable filters that can alter the presentation of the earphone according to your preference. Where the N5005 is radically different from anything else at the price is that it can be run either wired or wireless using a Bluetooth sender. This will give you eight hours of battery life and allows you to consider using high end earphones with something that has no headphone socket. Release is earmarked for spring 2018. As a company, Rega seems to make a point of releasing something new every Bristol and this year, the new arrival was pleasingly affordable. The P1 Plus is a first for Rega in that it combines a turntable with an on board phono stage- in this case a derivative of the Fono A2D with the digital section stripped out and some more budget given over to the analogue section. The resulting turntable looks very much like the normal P1 but is completely plug and play and only needs one mains socket to do its thing. The price is £328 and it should be in stores by the end of March, start of April. Having charmed us with the improbably tiny IOTA Alpha, Neat used Bristol to give the first UK demonstration of the IOTA Xplorer. This is an unusual speaker in that it takes the design premise of the Alpha - a small form factor with mid bass and tweeter arranged in horizontally and angled back. The midbass driver is taken from the higher end Momentum and Ultimatum models and is partnered with an Air Motion Transformer - a first for the company. This is partnered with a Neat speciality in the form of a pair of downward firing isobaric drivers for some low end shove. The resulting speaker is… almost… normal sized and based on its performance at the show should be an interesting contender at the £3,500 point. Neither was this the only isobaric speaker on show. Kudos has been steadily building their flagship Titan range of speakers and Bristol saw the arrival of the 505, the smallest member yet and the first standmount. The 505 is a two way design with a soft dome tweeter partnering a mid bass driver arrangement that is a forward firing isobaric setup with one driver in front of the other. Shows are not really the best place to make objective judgements on the performance of products but it has to be said that the 505 suggested that it is capable of absolutely sensational bass response, not simply for a standmount but for a speaker full stop. The price is yet to be completely decided- between £5,000 and £6,000 seems likely and availability will be May, June. If that sounds a little pricey and you just can’t wait that long, Monitor Audio were showing off their ‘stripped out special’ in the form of the Studio. These £1,000 standmounts take the midrange driver and tweeter from the enormous (and spendy) PL500 II from the Platinum range and mounts them in a dedicated cabinet. The result is a very focussed and capable standmount that trades off features for an exciting and engaging sound. The Studio is an interesting contrast to the normal process by which companies announce product, in that they were supposed to be unveiled at Munich, but as Monitor Audio was ready to go earlier than expected, they have been released now. If all these conventional box speakers feel a little… old hat… Dali’s latest offering might be more to your liking. The Callisto range comprises two wireless active speakers supported by an input hub. All the standard Dali niceties - wood fibre drivers, twin tweeters etc are here but the speaker is a true active and communicates with the hub via secure 5.8GHz wireless connection capable of 24/96 without any form of compression. There are some fantastic touches to the design too. As well as a volume indicator on the front panel, a touch sensor on the top of each speaker allows you to adjust the level without recourse to an app. If you are a grown up and have no interest in vinyl, this was one of the cleverest and best realised products at the show. Last year at Bristol, PMC announced a new partnership with German brand AVM and this year it was time for a status update and some new product. The company recently celebrated its 30th anniversary and released some strictly limited editions of certain products. These proved so successful that they have returned for full scale production. The range consists of an integrated amp, preamp, monoblock power amps, a CD player and streaming and CD front end. The products are exquisitely constructed and sounded absolutely fantastic at the arranged demo so we hope to look at some of them soon.

The ongoing lack of AV at the show is an issue but the number of people coming through the door suggests that the public likes what they see. Bristol remains a major event on the show calendar and it was confirmed while there that the Marriott has signed up for another six years so it looks like our pilgrimage to the West Country will continue for a while yet. If you want to keep an eye on what might be on show next year you can always bookmark http://www.bristolshow.co.uk/