A chip off the old block? 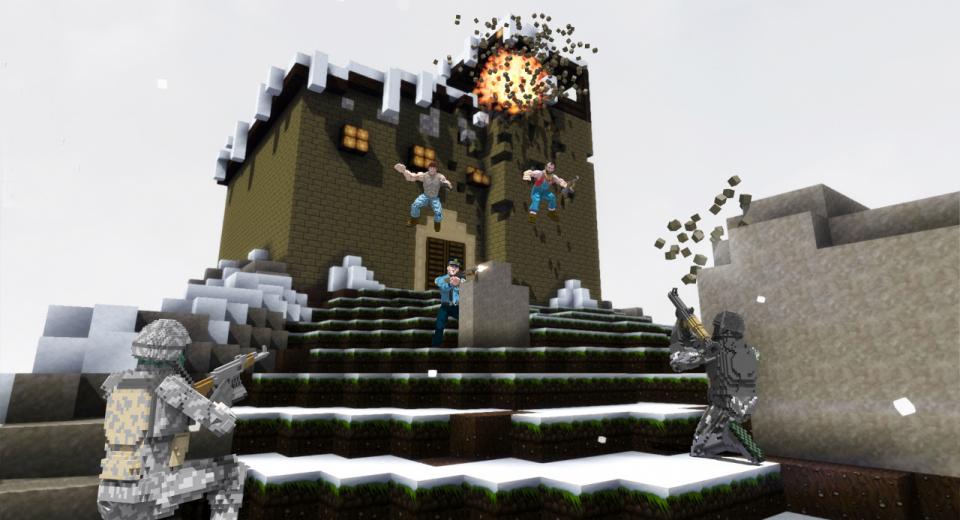 One thing is certain in the modern video game industry; if something without guns becomes successful enough, someone else, down the line, will add guns to it. So, what do you do to a peaceful game about building and exploring? You add guns to it. Minecraft has seen its voxel art style emulated numerous times for the first person shooter genre, and Blockstorm has arrived to do exactly the same.

The FPS is a genre that is now well saturated, especially so on PC. It’s not difficult to find free-to-play examples on Steam that offer a surprising amount of depth and complexity. We’re talking about a platform that lets you play games like Planetside 2 and Fistful of Frags for free. Any FPS demanding payment must be worth its weight in comparison to the free alternatives available.

Ace of Spades and Guncraft came first to the voxel FPS genre, dipping their toes tentatively into the cubic waters and pulling them out to find piranhas attached. Or should I say blocky squids? Both had their respective issues from poor execution to horrible visuals and as such, weren’t considered releases worth noting.

Blockstorm is following the now well-beaten path of many indies on Steam and the choice has been made for it to be released as an Early Access title. As such, this isn’t a review, more of a first impression, and should act as an overview in to what features are currently on offer for the £8.99 asking price. The game isn’t finished and is subject to change; at the time of writing this Blockstorm is currently in version 0.95. Where Ace of Spades and Guncraft differ most obviously to Blockstorm is their character models. Blockstorm uses its own unique and more human looking character models, moving away from the voxel models reminiscent of Minecraft’s Steve, like Ace of Spades and Guncraft utilised. As such, you get a more fluid animation quality from characters, making the whole thing feel more like its own game rather than another ‘Minecraft-with-guns’.

Destruction physics lay at the centre of the experience. Depending on what weapon you wield, any cover, wall or flooring can be destroyed with relative ease. You’re given blocks with which you can build your own cover should your surroundings become too damaged. If you don’t like where your enemy is currently camping, just blow it up. Destroying the foundations of a building or wall will also cause it to collapse, rather than float. It’s nice to see and reminds me of the good old days of flattening buildings in the excellent Battlefield: Bad Company 2.

Destruction physics lay at the centre of the experience.
The game, for now, comes with three rather uninspired game modes. Deathmatch, Team Deathmatch and Assault make up your options so far. Assault, being the only one there that isn’t self-explanatory, plays like an area capture game. One team attacks an area while another defends it. It works well in the fact that it requires teams to fashion makeshift defences in order to keep the enemy out; one of the only times you’ll see building and destruction utilised for anything more than killing someone or defending yourself.

Presently the game has a group of issues, some which the developers Ghostshark can assess, and will be expected to. The most glaring problem is the lack of players. Certain periods of the day show servers devoid of life. Most of the time you will only see a couple of servers full across the three game modes available. The options menu, in its current state, is somewhat underdeveloped. You have the choice to turn AA on or off, the option for dynamic shadows, bloom and lens flare, V-sync and also an option for ‘particles’. I’m not 100% sure what this means, but I believe it is the particle effect that happens once a block is damaged. What’s missing is an FOV slider and some resolution options past the 1080p mark, with perhaps some texture quality choices too.

More game modes and weapons would be welcome, and these have been announced to be in the pipeline by Ghostshark themselves. In the hours I played, I didn’t encounter a single bug, which can only mean good things. The only irritant was the strange effect they’ve placed on the sniper rifle’s scope. They’re calling it ‘inertia’, which is quite accurate. I assume it’s there to eliminate snipers being over powered in their ability to ‘quickscope’, but it just makes the weapon feel horrible to use. It’d be nice to see another alternative used rather than the ‘inertia’ effect, because it’s just frustrating at the minute.

I found my time with Blockstorm a surprisingly enjoyable one. The shooting functioned well and the in-game editors were fun once you got the hang of them. This is nothing inspired, however, and it is definitely in need of both more work and more players before I’d happily sink £10 into it. It is, however, better than the titles it most closely resembles, and should be at the top of your list if you’re considering this, Ace of Spades or Guncraft.

More work is definitely necessary before the game really starts being something to talk about. If Ghostshark’s most recent 0.95 update is indicative of the work they continue to put into the title then it should only continue to get bigger and better.