Best Soundbars for the Olympics

All the sounds of Rio 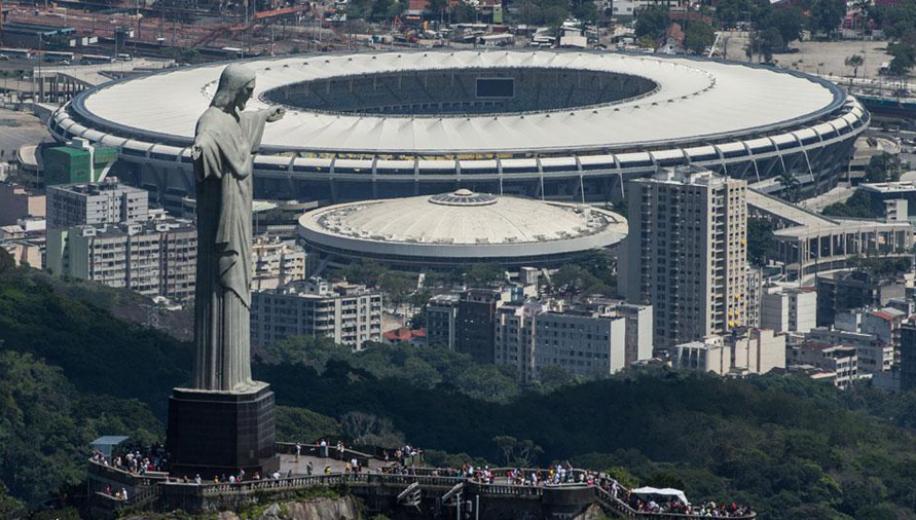 It's already been an amazing summer of sport and it's not over yet, with the Rio Olympics just around the corner.
So if you haven't already used the Euro 2016 Championships as an excuse to upgrade the sound quality in your living room, now is the perfect opportunity. Those of you using a projector will definitely need some sort of audio solution and even if you have a large screen TV, you'll probably have noticed that it doesn't sound that great. The slimline nature of modern TV panels results in there being very little room for a decent set of speakers, which means few TVs can really compete with a decent soundbar. In this article, we'll suggest four soundbars that can beef up the sound of your display and one that can even handle the new Dolby Atmos and DTS:X immersive audio sound formats. The Cambridge Audio TVB2 would make a great starting point for anyone thinking of boosting the sound quality in their lounge prior to this year's Olympic Games. The TVB2 has an attractive and unobtrusive design that won’t obscure your TV and it also has a decent level of build quality. You also get great connectivity, including three HDMI inputs, an HDMI output with support for ARC (Audio Return Channel) and Bluetooth. The TVB2 comes with an easy to use and effective remote but, above all, the Cambridge Audio TVB2 puts in a great sonic performance with both movies and TV. In fact it's capable of a big enough sound that it could be used with a large screen TV or even a projector as you catch up on all the Olympic action from Rio.
An attractive design, plenty of connections and a great sonic performance make the TVB2 a great Olympic partner
The front soundstage is far more expansive than the breadth of the speaker bar would suggest, with plenty of definition in the mid-range and higher frequencies. The lower end is also well represented thanks to the active subwoofer, with multi-channel sources sounding particularly great. So as you watch all the action from the Olympic stadium, you'll fee that you're right there. The package also puts in a good effort with music although there’s a slight lack of nuance in the mid-range so, as ever with a soundbar, it’s no replacement for a decent pair of stereo speakers. All things considered, however, the Cambridge Audio TVB2 is comfortably worth the £299 asking price and well deserving of its Recommended award. If you want to move up the scale slightly, then Denon's HEOS HomeCinema should definitely be in the starting blocks. It's also attractively designed, looking very similar to the TVB2 and is just as well constructed. There are plenty of connections, including an HDMI input and an HDMI output with ARC but the HomeCinema doesn't come with a separate remote, you can either use the excellent HEOS App or your TV controller. The Denon includes built-in WiFi and forms part of their HEOS multiroom ecosystem, allowing you to listen to your favourite music streaming services or play music from connected devices. You can also send the TV audio to other speakers connected to the HEOS network, which might prove useful if you don't want to miss any Olympic action whilst you make a cup of tea. You have the option of stand or wall mounting the soundbar, making the HomeCinema ideal for projectors or TVs. Setting the Denon up is very straightforward, with the HEOS App taking you through the entire process.
This soundbar not only delivers a big room-filling sound but, thanks to HEOS, you can even listen to the action in another room
You can select different inputs, choose sound modes and set the subwoofer level using the app and there are other features available including a Night Mode and a Dialogue Enhancer. However it's the sound quality that really matters and here the HomeCinema really delivers with a clear and precise sound that is capable of an open front soundstage and plenty of deep, well integrated bass. The mid-range is nicely defined, maintaining dialogue fidelity; whilst the higher frequencies are also handled well ensuring that sounds don't become sibilant. The HomeCinema can go loud without distorting and, combined with the subwoofer, it can produce an excellent room filling sound. So you'll be able to feel like you're actually in Rio whilst you watch the action through the night and the HomeCinema will ensure you catch every word of commentary. The Denon is a high-performance soundbar that won't cost a fortune and is deserving of its Highly Recommended award. Of course not everyone has a massive TV or a projector but that doesn't mean you can't improve the sound quality of your display. If you have a TV with a 55-inch screen or less and want to boost the sound without breaking the bank, the Samsung HW-K450 could be the soundbar for you. It's attractively designed, with a lovely finish and great build quality. It comes with a matching wireless active subwoofer, along with a remote control, an optical digital cable and brackets for wall mounting. There's even an optional wireless surround kit if you want to create a 4.1-channel system. The K450 has an HDMI input and an HDMI output that supports ARC; it also has Bluetooth support and Samsung's TV SoundConnect feature. The included remote control might be a little small for some people but we found it quite effective and for Android users there's also a Bluetooth app.
If you have a smaller screen size or you're on a budget then the Samsung HW-K450 could be the ideal soundbar for the Olympics
The soundbar is easy to setup and as long as you're careful about subwoofer placement, the performance can be very good. The K450 is surprisingly refined for a budget soundbar and it can go loud without distorting or becoming brittle. The subwoofer isn't a monster but it gets the job done and combined with the soundbar the two can deliver an open front soundstage that should be enough for the average living room. The K450 can also reproduce sound effects precisely, whilst keeping dialogue clear, important for combining all the crowd noise and commentaries from Rio. The Samsung sounded good with music and has a decent level of file support, making it an ideal budget soundbar with a great all-round performance. So if you're looking to pick up a budget soundbar before the excitement of Rio begins, the Best Buy award-winning HW-K450 should definitely be at the top of your medal list.

The soundbars that we've mentioned so far are designed to create an open front soundstage and beef up the bass but none of the can be as immersive as a genuine surround system. However Yamaha have been developing soundbars that can do just that, thanks to their sound projection technology. This literally bounces controlled beams of sounds off your side and rear walls to create a more immersive surround experience without actually using rear speakers. The Yamaha YSP-1600 is the cheapest example of this type of technology and a bit of a bargain, although the price doesn't include a subwoofer. The build quality is top notch and connectivity options, including an HDCP 2.2 compliant HDMI input capable of accepting 4K signals up to 60 frames per second, are almost equally as good. If that wasn't enough, you also get integration with Yamaha's excellent MusicCast system, turning the YSP-1600 into a networked audio streamer and/or part of a multi-room audio system.
If you want to feel surrounded by the crowd during the Olympics then the YSP-1600 can achieve that from a single soundbar
This 5-channel digital sound projector also lives up to its name by actually being capable of producing sound behind the listening position, courtesy of eight 'beam' drivers that can be adjusted for different room layouts. It's equally at home with movies, TV and music, too, meaning whatever you throw at it, the Yamaha sounds accomplished and refined. So if you want to be surrounded by the crowd in the Olympic stadium this August, then the YSP-1600 is a great way of achieving that effect without running speakers all over your lounge. Our only caveat is that the bass performance is limited unless you buy an optional subwoofer, although even then the Yamaha is a simpler and more cost effective solution to 5.1-channel surround sound. Yamaha have been making soundbars for a long time and it shows with this well constructed and cleverly designed model that delivers in terms of both features and performance, making it a worthy winner of a Highly Recommended award.

Our final choice isn't cheap but if you're looking for a soundbar that can completely immerse you in this year's Olympic action, then the Yamaha YSP-5600 is currently the only game in town. This soundbar uses the same sound projection technology found on the YSP-1600 to support both Dolby Atmos and DTS:X. Although it is quite large and expensive, you'll need to buy the subwoofer separately, the soundbar certainly works and actually does create an immersive audio experience. We were initially sceptical about the ability of the YSP-5600 to produce an effective immersive audio experience but using demo scenes that we're very familiar with, we were surprised at how similar the experience actually was. Whilst a solution like the YSP-5600 can never fully replace an actual immersive audio speaker set up, it's certainly a lot easier to install and far less intrusive in terms of speakers all over your lounge.
There may be no Dolby Atmos Olympic broadcasts, but your movies will sound great!
However the majority of the content that you'll be listening to won't be Dolby Atmos or DTS:X, so it's important that the YSP-5600 can also perform well in terms of more normal soundbar duties. Thankfully it doesn't disappoint, with all of Yamaha's experience coming into play and the soundbar producing a lovely open sound field that filled the room. There was a nice sense of envelopment but dialogue always remained clear, making the YSP-5600 ideal of watching all the action from Rio. The bass performance was good but you will need to add a subwoofer to get the full effect. If you're a fan of Yamaha's DSP processing, there's a decent selection of options including Stadium, which might come in handy for the Olympics. The YSP-5600 also performed well with music and it supports Yamaha's MusicCast multiroom system, meaning you'll get plenty of use out of it long after the closing ceremony.

So there you have it, five soundbars to suit all budgets, screen sizes and audio requirements. All of these soundbars were award-winning when originally reviewed and reach one is capable to delivering a superior audio experience during this year's Rio Olympics and beyond. Just remember that because of the timezone difference, you might have to keep the volume down in the middle of the night but feel free to crank it up during the day!
To comment on what you've read here, click the Discussion tab and post a reply.
Article Discussion (6)