The 'end' of the MCU, a decent DC film, new Tarantino and a new Scorsese/De Niro team-up. A great year? No, but some unmissable events. 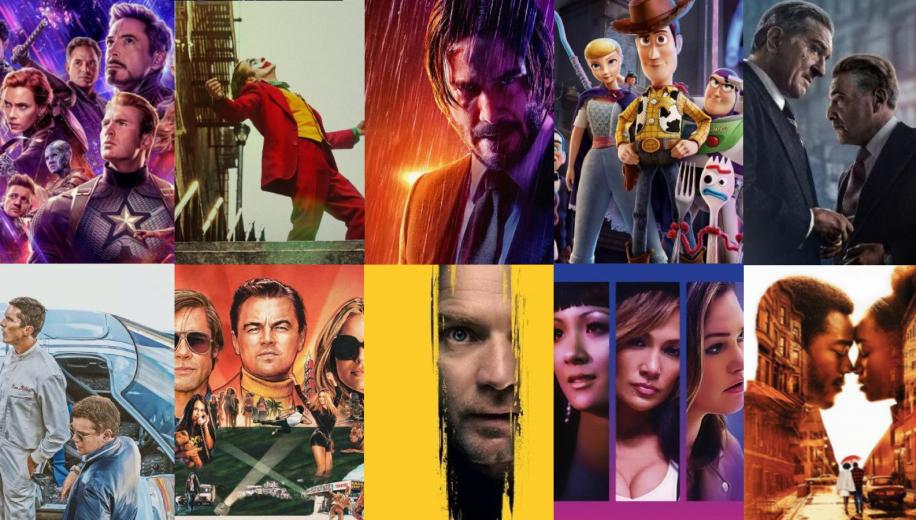 We take a look back at ten of the best movies of the year. Whilst not a perfect year for movies by any means, 2019 has provided at least a few decade-topping entries as we come to the end of road for the original MCU superheroes and complete Scorsese's classic gangster saga. It's always tough selecting the favourites, with plenty of less well-known gems going by the wayside (Netflix's The King) in the face of fierce competition. Indeed, in amidst the continued dross that comes over on streaming channels, there have been more Top 10 contenders than ever before, including one that actually has a shot at the No. 1 spot. Let's see what 2019 delivered...

10 – If Beale Street Could Talk

Moonlight was one of 2016’s most stunning films, so director Barry Jenkins’ feature film follow up was always going to be aesthetically pleasing. As it happens, If Beale Street Could Talk is beautiful, profound, intelligent, emotional and touching – truly one of the most moving films of the year.

It's breathtakingly beautiful and eye-wateringly profound; this is serious cinema that delights the eyes, engages the brain and tugs at the heart. The film works on a visual level, and the script is buoyed by a series of exemplary performances – from the whole cast, but Layne, King and Tyree Henry in particular – and the memorable score. While it’s undoubtedly not for everyone, Beale Street is a must-watch for cinephiles, historians and fans of art in any form.

Despite what seemed like a perfect finale in the third instalment, Toy Story returns to prove the glorious exception to the rule on third sequels. Pixar's Toy Story 4 is a fabulous accomplishment, finding a new story to tell which feels like such a perfect complement to everything that has gone before, and finding a new way to develop these characters - both old and new - without simply retreading the old formulas.


It's amazing the way they give depth to the villains (when it comes to their headlining features, like Endgame and this, Disney really have a handle on decent villains), and bring these toys to life (and this is easily the most stunning of all of the films), all of which - for those who have followed the franchise for almost a quarter of a century now - results in quite the journey, whether shared with kids, grandkids, or just your own warm memories of your first Toy Story experience. Utterly, utterly unmissable.

In a big year for Stephen King remakes, Doctor Sleep stands out – one of the prolific author’s more recent and lesser-known novels that’s also a sequel to one of his iconic classics, The Shining.


It’s a clever and affecting film that mightn’t have the all-out revulsion and horror of Kubrick’s film but offers an altogether more cerebral, hair-raising and chilling dread that perfectly fits Dan Torrance’s character and pays homage to both King and Kubrick without seeming like a pointless cash-grab. Well worth a watch for fans of The Shining on the page and screen.

Keanu Reeves returns to now his defining role, delivering an inventive, expansive, ballistic ballet of death in this tremendous third entry in the action franchise. In terms of memorable action epics, it just doesn't get any better than this franchise, which has turned itself into the ultimate action comic book come to life, making its mark with mysterious characters with titles not names; seeing foot chases turn into horse chases, bike vs. horse chases, and, before we know it, bike vs. bike with samurai swords chases.


The trilogy probably leaves director Chad Stahelski the veritable long-shot one-take Scorsese of action movies, going wild in his final act setting just because... well, Bruce Lee: Game of Death. On paper, this is every action movie you've ever seen condensed into one collection of greatest hits fight scenes. If you like action, it's awesomeness personified. It is grin-inducing excess, which, compared with any other top tier movie in any other genre may be seen as frivolous and gratuitous. But for the same reason that Endgame really deserves a near-perfect pass on any flaws in favour of it being the conclusion to a 22 movie mega-franchise, Parabellum can't really be compared to anything other than its own ilk. And as action movies go, it doesn't really get any better than the John Wick movies.

One thing that Hustlers makes clear – if it wasn’t already – is that Jennifer Lopez is an absolute star, headlining a film with female characters that actually have depth, humour and relatable struggles that transcend their job and just make for really well-rounded characters. There’s a celebration of female bodies and independence that makes for an un-sleazy and really enjoyable watch, enhanced by a funny and insightful script.


There are plenty of reasons to watch Hustlers - a pitch-perfect cast, a killer soundtrack and some fantastically lively filmmaking are just some of them. This is a smart, warming, empowering and funny heist caper that puts female friendship at its heart and a career-best Lopez performance front and centre. The script is funny, condescension-free and offers each character space to form a personality. It also manages the fine line between making these women heroes or antiheroes, and does it in an entertaining and fun way. But the film, at almost every turn, belongs to Lopez; this is an actress who, rightly or wrongly, hasn’t ever really been taken seriously on a big scale. Hustlers will surely change all that.

Rivalry, lovely visuals, speedy pacing and fascinating characters make Le Mans '66 unmissable. Damon and Bale are a great buddy-buddy team to watch, and it really isn’t a movie just for racing diehards, either; this really is a fascinating story of rivalry, pride, drama and the little guy taking on Goliath, and it’s well acted, well written and well directed.


This film doesn’t, for want of a better phrase, reinvent the wheel, but it’s still fun and engaging and entertaining. Sure, it doesn’t particularly push any boundaries or take many of the big risks its lead characters might, but Le Mans ’66 is thrilling – you forget about any racing film tropes you might be passing as you speed past them in the passenger seat of a zooming car. There might be some wheel-spin and lock-ups, but otherwise, this film is great to look at, effectively entertaining, and (pun intended) a fabulous star vehicle for Bale and Damon that passes the finishing line with aplomb.

Scorsese, De Niro, Pacino, Keitel, and Pesci - The Irishman is almost everything you could possibly hope for from this long-awaited ensemble gangster epic. Whatever you might want to say about Netflix, without them, we would not now have a fabulous bookend to a quartet of careers - Scorsese's best film since his golden run with DiCaprio (which arguably ended with 2010's Shutter Island) and easily the best films that the likes of De Niro, Pacino, Pesci and Keitel have done in decades.


Watching The Irishman, it's easy to see what we have been missing in the years since Scorsese did a proper gangster epic. He's at home in this environment, revelling in the news stories and committee gatherings; the quiet conversations between powerful people; the easy narration of events and vast coverage of an entire era of crime; the on-screen read-out of the fate of some of these individuals; and the frequent burst of violence that punctuate the whole grand Shakespearian opera. And it's just a joy to spend more time with this group of ageing friends who you almost don't want to let go of come the end of the movie. It's magical; an event, and whilst some would rightly argue that it's no less or great an event than the tremendous MCU bookend Endgame earlier this year, it's certainly great that 2019 brings us both. The Irishman is a fabulous Scorsese tribute movie; a reunion and a tragic farewell all rolled up into one gorgeously shot, quintessentially Scorsese, gangster epic; powerfully acted, punchily scripted, superbly scored, and utterly unmissable.


Controversial for its anarchic sensibilities and ostensibly sympathetic depiction of the creation of a (fictional) future mass murderer, Joker is (thankfully) unlike anything else in Warner's DC movie universe, painting a palpably plausible depiction of mental illness and delusional psychosis. It's powerful, arguably thoughtful work - even if the socio-political timing is far from incidental - and it's easily best enjoyed for the painfully raw lead performance, which had a hell of a high bar to top after the purpleness of Nicholson and the perfection of Ledger (and the inimitable vocals of Hamill), and which thus deserves recognition for the fact that Phoenix comfortably distinguishes himself despite the confines of an iconic role.

Tarantino's 9th is one of the biggest event movies of 2019, a classically stylised and suitably epic ode to a Classic Age in Hollywood, riding high on its fantastic Leonardo DiCaprio / Brad Pitt bromance and boasting one of the top 3 most impressive ensemble casts of 2019.


This is Tarantino, so some might feel the undeniably indulgently languid pace, the abortive cameos, the seemingly-going-nowhere scenes, but if you go with it all you may find that this is, mostly, also classic Tarantino: controversial, fresh and unapologetically old school - more than happy to take its bloody time getting to the damn point. From the dialogue to the acting, to the cast and the cameos; from the start to the very end - complete with mid-credits scenes - this is a must-see event movie. And, even as a huge Marvel fan, it's great to see a must-see blockbuster that isn't superhero driven.

Far from perfect, Avengers: Endgame is still a landmark event in cinematic history: an absolutely unmissable culmination of a completely unprecedented twenty-two films of painstaking character-establishing and world (or even universe) building over the course of more than a decade.


For the holy trinity of Robert Downey Jr.'s Iron Man, Chris Evans' Captain America and Scarlett Johansson's Black Widow - as well as Josh Brolin's genre-defying antagonist, Thanos - this is the ultimate salute; a powerfully emotional journey, which manages to take us all the way back through the complex mythology of the MCU and juggle literally dozens of characters from across all of the films to give us an epic end run. It remains as fitting a conclusion as anybody could rightly hope for to what will likely go down in film history as a three-phase 22-film run climax that can simply never be bested.


What do you think of our movies of the year countdown? Have we missed any future classics that you would like to have seen? Feel free to let others know what your personal top ten films of 2019 are in the discussion thread - we'd love to read them.
To comment on what you've read here, click the Discussion tab and post a reply.
Article Discussion (96)