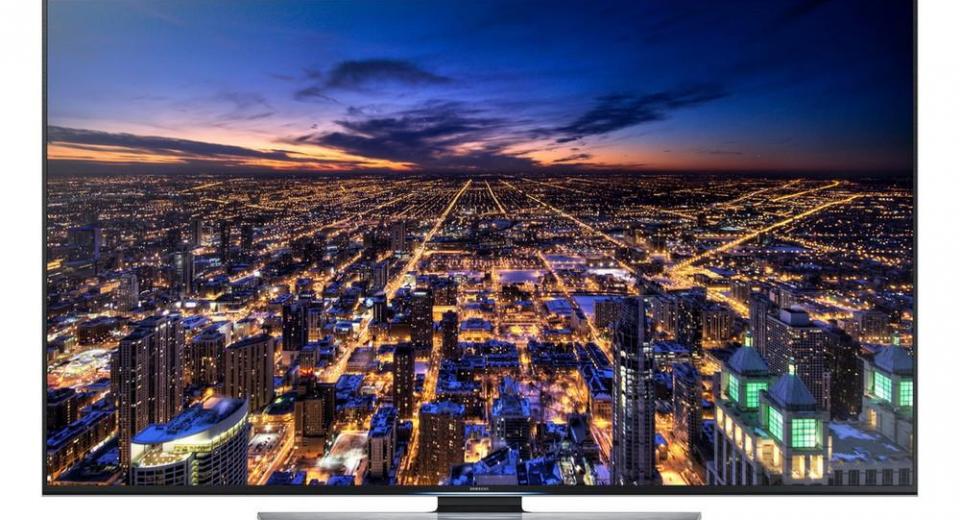 As we enter 2015, with all the new announcements from CES, we can reflect that this was the year when Ultra HD TVs reached mainstream price-points. In fact, there are already 4K TVs from major brands priced at under £800, available to buy now.

OK, there's not really very much native content to watch on them yet, but most of the newer 4K TVs will give you access to the services of Netflix and Amazon, so you’re not totally bereft and it’s definitely the first ever Christmas when you've been able to stream 4K!

Nobody has embraced the 4K TV market quite as wholeheartedly as Samsung and the results have been highly impressive, right across the board. The HU7500 is available in four screen sizes – 48, 55, 65 and 75 inch – and prices start as low as £1,300. Whist me realise that’s still quite a sum for most, it’s not really a great deal of money for cutting edge tech. What’s more, to take in to account the evolving standards in the 4K world, the HU7500 is compatible with Samsung’s upgradable One Connect Box, ensuring a degree of future-proofing few can match. There’s also a gorgeous design with one of the sleekest base stands on the market. It’s not just the looks and connectivity options that impress, as the HU7500 delivers in just about every other department, too, boasting fantastic picture quality courtesy of an excellent LED dimming system which creates deep blacks that marry with superb colour accuracy. Whether you’re watching one of your old DVDs or some actual 4K content the quality of the video processing means you’re sure to be happy. Samsung might be big on the idea of pushing curved screens as the must-have look but the HU7500 proves they also know how to play it straight.

Much has been made over Panasonic’s claims that this TV would eclipse the performance of their superb era-ending plasma TV range. It might not have quite pulled that off completely but it’s still a superb TV and you would never find a 4K plasma TV. The scaling of signals carrying Full HD (1080p) material is so good that you’ll be losing next to nothing in the translation up to a 3840 x 2160 pixel count and, at times, the AX902 even gives the impression that Blu-ray discs look native 4K. Panasonic has invested lots of time and money in to the backlighting technology of the AX902 and this has paid dividends with some of the deepest blacks we’ve seen on a LED/LCD TV – 4K or not. It’s also great with 3D, delivering 1080p to each eye by a family friendly passive system. This flasgship TV also boasts an excellent suite of Smart features, including a built-in camera for Skype video calls, access to all the catch-up TV services and more besides. The only real catch here is the price so it might be worth waiting until the January sales to see if the current £3,400 price dips, which we except it will.

No other manufacturer has quite so much at stake with 4K as Sony does so perhaps it’s fitting that the latest X9005 is probably our favourite Ultra HD TV, so far. Some won’t like the new wedge shape design, which is thicker than most, but it’s there for a purpose and utilised to house superior speaker electronics. More obvious evidence that Sony is pushing on with improving audio performance in the TV sector comes from the large speakers either side of the screen. Again, these will divide opinion but you can’t argue with the results as the 65X9005B sounded almost as good as it looked. Like most TVs these days, the X9005 has a wealth of video streaming apps and Sony is placing a great deal of effort in to making content discovery at the heart of its Smart TV platform and the TV SideView app is a particular highlight there. Naturally, it’s the pictures we’re more interested in and the flagship Sony 4K offering delivered in spades here. Whatever you to choose to watch the X9005 produces breath-taking images, thanks to some of the best video processing on the market and a fantastic local dimming system which enhances the already impressive dynamic range. Spinning up a decent Blu-ray, or accessing the 4K Netflix service, will obviously give you the best results with the former looking virtually Ultra HD standard and the latter like no other video streaming you’ve seen before. The 65-inch X9005B can now be had for just under £3,000, whilst the 55-inch is just under £2,000 so prices are falling quite rapidly, ahead of the new product announcements at CES. Obviously, these are still expensive items, but if you want the best you have to be prepared to pay for it.

It started as a trickle but the floodgates are beginning to open and there’s seemingly no escape from the trend for curved screen TVs. While we can’t claim to be blown away by the effect, so far, we’ve certainly had no complaints with it in practise and the quality of the HU8500 is such that you’ll be blown away regardless. There’s no denying that as a piece of AV furniture, the contoured looks of the UE65HU8500 make it an absolute stunner and the designer looks are carried over in to the new Smart Touch remote which blends voice, gesture and touch controls to great effect. As ever, Samsung’s Smart TV platform is a hugely comprehensive offering, with access to all the major UK catch-up services as well as just about every major streaming service out there – including 4K Netflix. There’s almost nothing you could fault in terms of the HU8500’s picture quality. Deep blacks, great screen uniformity, top quality picture processing and supremely faithful colour fidelity are just some of the qualities the HU8500 brings to the table and, just every so often, the curve will give just a hint of providing a greater sense of depth to images. The quality of the 3D images were also superb with brightness, depth and pop-out aplenty. The designer looks of the 65-inch HU8500 come at a price, however, with an entry fee anywhere between £2,800 and £3,300 this Christmas. The 55-incher well set you back somewhere in the £2,000 region, which is £700 of the suggested price. For that money you do get the assurance of the upgradable One Connect box in the bundle, though, which gives the price more a sense of realism. If you like them big, curvy and cutting-edge, there is currently no better choice than the Samsung HU8500.

Panasonic used to have the luxury of being regarded as a really premium brand but since the demise of plasma technology, they have had to re-evaluate and they now tackle the marker in a variety of sectors. Whilst the AX902, above, is firmly high-end, this Ultra HD TV is far more affordable. In fact, you can pick up the 48AX630 up for under £900. The 55-inch – which is a more reasonable screen size for appreciating 4K – is less than £1,200. The AX630 follows a familiar design with a very narrow bezel surrounding the gloss black screen. The frame is two-tone, with a silver strip across the top and bottom and black ones running down the sides. Two of the three available HDMI inputs are version 2.0 compatible, so it’s reasonably future-proof as well. As an entry-level 4K TV, you would struggle to do better than the AX630. It boasts a winning combination of great blacks, accurate colours, excellent screen uniformity and generally superb video processing, on the picture front, and a host of well implemented Smart TV features as icing on the cake. Yes, there’s no 4K Netflix but there will be a raft of affordable Ultra HD media players along soon enough and the (comparative) price of the AX630 is such that you can factor in that outlay as part of your budget. The other thing to consider is the screen size in relation to UHD content and there’s no doubt you will get more benefit by going bigger but that’s something for your own eyes to decide. In short we were very, very impressed by this TV – more than we expected to be, in all honesty!