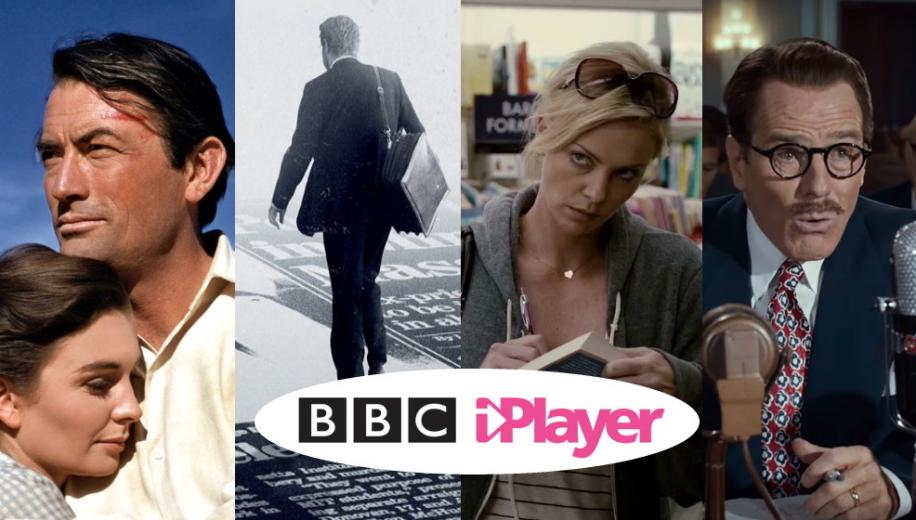 The BBC iPlayer has the sort of library that befits the well rounded tastes of film buffs who aren’t necessarily just after the latest CGI heavy blockbuster. Here’s a look at what’s currently available to view before coming off the service by the end of June 2020.

This latest batch of films includes a Dickens adaptation, hard hitting true-life social dramas, a couple of true-life semi-biographies, war and crime thrillers and a couple of dark comedy/dramas.

Remember, once the films have expired on the iPlayer, they’ll no longer be available on your device if you’ve downloaded them, since the content is only available for the same period (generally 30 days) as on the iPlayer itself.

Films are presented in the order they are leaving the iPlayer

Sprawling Technicolor, anamorphic lensed Western epic that charts the arrival to the West of retired sea captain Gregory Peck who plans to marry his fiancée but is dragged into a ruthless land dispute between his future father-in-law and the head of the local cowboys.

The film was generally well received but was subject to rumours of friction on set over William Wyler’s propensity for multiple takes but without him really telling his actors what he wanted from them. However he and Chalton Heston hit off and their next film was Ben Hur.

The Big Country also features an Oscar nominated score by Jerome Moross which was one of Hollywood’s most recognisable Western themes up until Elmer Bernstein’s music for The Magnificent Seven came and showed everyone how to ‘clap your hands’ just two years later.

When the Boston Globe’s deep dive “Spotlight” team follow up a few leads as they look for their next exposé, they have no idea that it will herald a year long, Pulitzer Prize winning investigation into shocking abuses against children by members of the Catholic Church. The tenacious enquiry uncovered a decades long conspiracy of silence sanctioned by those who sought to put the protection of the Church before justice for the innocent victims.

An all star cast brings what might possibly have been just as well served as a documentary to life by showing how the gradually unfolding horror of the team’s discoveries affects them, thus giving some voice to the victims who remain narratively present but not yet fully emerged from their painful shadows. The procedural elements of the investigation never get dry or dusty and the moral implications of inaction by all parties (the Church, the police, the lawyers and the press) lie heavy after the end of the film.

The subject matter immediately makes Spotlight a tough watch but the viewer is rewarded with the knowledge that, at its absolute best, the power of journalists seeking the truth is not something the world should ever be without.

Spotlight was roundly praised, picking up many awards including Best Picture and Best Original Screenplay for 2015 at the 88th Academy Awards.

In the period following her beloved Albert’s death, Queen Victoria’s mourning and depression deepen to the point where she withdraws from public life. Albert’s trusted servant John Brown is summoned in the hope he can persuade the grieving monarch to re-engage with life. Slowly his charm, confidence and distinct lack of respect for court protocol start to win Victoria over but Queen’s advisors become concerned at his rising influence over her.

The title Mrs Brown comes from the rumours that accompanied the developing warm relationship between Brown and Victoria, though nothing untoward was ever publicly admitted.

In the late 1920s in Japanese-occupied Seoul, a game of cat and mouse unfolds between the resistance fighters intent on destroying Japanese facilities at any cost and the agents trying to stop them. One of these is a Korean-born Japanese police officer who once associated with resistance members himself. Loyalties are soon tested.

The Age of Shadows was Warner Bros. first ever Korean production and topped the Korean Box Office for three consecutive weeks but missed out on selection for submission for Best Foreign Language Film at the 89th Academy Awards.

David Walsh, a dedicated journalist, suspects there’s something more than athletic prowess behind cyclist Lance Armstrong’s record 7 consecutive Tour de France victories. Walsh’s investigation exposes Armstrong as a serial drug cheat in a sport that has become rife with corruption, succumbing to a 'win at all costs' mentality. Armstrong’s fall from grace is inevitable.

Director Stephen Frears based the movie on Walsh’s Seven Deadly Sins exposé and asked screenwriter John Hodges to write the screenplay because of Hodge’s background as a doctor.

Ben Foster, who plays Armstrong, reportedly took performance-enhancing drugs to get a better understanding of the role and its motivations.

Humble but gullible orphan ‘Pip’ Pirrip spends his boyhood with his kindly blacksmith guardian and visiting Estella, a local girl and adopted daughter of jilted spinster Miss Haversham, with whom Pip falls in love. However, his life takes a series of sharp turns as he stumbles upon frightening escaped convict Magwitch and then is whisked off to become a member of London’s high society by an unknown benefactor. Despite his new found wealth and gentlemanly status, Pip still cannot get what he really wants, the heart of the cold Estelle.

Widely regarded as one of the best versions of any of Charles Dickens’ works to grace the silver screen, Great Expectations was actually adapted from a truncated stage play interpretation by Alec Guinness rather than the source novel itself.

In the midst of the The Troubles in the 70s, Terri Hooley opens his record store, Good Vibrations, on ‘the most bombed half mile in Europe’.  Terri gets behind a new music genre called punk rock which brings musicians and fans together and starts to revitalise the broken community.

Produced by Coldplay’s Chris Martin, the actual Good Vibrations record label that came from Hooley’s enterprise included singles from The Moondogs, The Outcasts and The Tearjerkers but without doubt the most high profile release was that of Teenage Kicks by The Undertones, an unofficial punk anthem for those who found The Sex Pistols sneering swagger just a bit too manufactured.

The seemingly idyllic family-based community of Suburbicon in 1959 hides petty-mindedness and a building simmering tension that becomes apparent when the town’s first African-American residents move in.

The film follows Gardner Lodge (Damon) as a mild mannered husband and father who must navigate his beloved Suburbicon’s newly exposed dark underbelly of betrayal, deceit, and violence and face the consequences of a disturbing home invasion.

Considering the talent involved in the production - the script was written by Joel and Ethan Cohn and was a long gestating project for them and George Clooney - the Box Office and critical response for this black comedy was poor.

An ordinary man has to go on the run and protect his estranged children when the world is faced with a devastating alien invasion. Heading towards his ex-wife’s home in the hope of finding sanctuary, Ray Ferrier must face and overcome many dangers along the way to keep his family safe, even as the world’s defences are overwhelmed.

This take on HG Wells’ classic alien invasion tale shifts the location to modern day New Jersey and the perspective to that of an average Joe (Tom Cruise) as the audience follows the unfolding invasion through his eyes. Spielberg discarded the benevolent extraterrestrials that had marked his previous alien encounter outings and served up adversaries from space bent on the destruction of mankind. And in War of the Worlds, it looks like they might achieve it!

In 1947, Dalton Trumbo is at the pinnacle of his career as a Hollywood screenwriter but his reputation and fortunes are diminished as his communist sympathies are exposed and he is hauled before the House Committee on UnAmerican Activities. Following his refusal to testify he is incarcerated where, upon his release and despite being blacklisted during the subsequent decade, he uses his gift for words to hold up a mirror to the absurdity and injustice of Hollywood’s acquiescence to rampant McCarthyism, all the while contributing to the industry that had rebuked him.

The film was generally well received but as with all stories told from a single narrative perspective has accusations of bias as it tells its tale of a man of principle who will not compromise, regardless of the consequences.

Mavis Gary is a 37 year old, self-absorbed writer of Young Adult fiction who is adrift in a sea of drunken one night stands following her recent divorce. Driven by a desire to recreate her golden teenage years, she returns to her hometown and sets about trying to win back an old flame who is now married with a newborn baby. Everyone, apart from Mavis it seems, has moved on.

Young Adult was a script by Diable Cody which came about after own infatuation with clinging onto deluded teenage fantasies was pointed out to her. Clearly, writing screenplays examining your own behaviour is potent therapy.

Dennis Peck is a career LAPD cop, a veteran who still patrols the streets in uniform. It’s from this vantage point that Peck can control his many scams that are lining his pockets as he pressures and manipulates both colleagues and petty criminals who know not to cross him.

Now though, a young Internal Affairs officer determined to make a name for himself has suspicions that not everything about Peck is above board and he’s out to catch the devious renegade.

Richard Gere puts on a black hat here and delivers an utter rotter wrapped up in a charming, facade shot through with a murderous streak. Quite frankly, he was Hollywood’s most corrupt and charismatic cop until Alonzo Harris uttered his immortal ‘King Kong’ speech in Training Day.

Coming out in the same year as Pretty Woman, Internal Affairs allowed Gere to stretch his wings character-wise  and was notable for being a modest success at the Box Office which really took off on home video.

On the eve of a relocation from Madrid to Portugal with her current partner Lorenzo, Julieta bumps into the childhood friend of her daughter from whom she’s been estranged for 12 years. Jumping at the chance to reconnect, Julieta cancels her planned move to try and build bridges with her daughter. This leads her to reminisce over the events that forced them apart in the first place.

The film was inspired by certain passages from Nobel prize winning author Alice Munro’s book Runaway which Almodóvar bought the rights to, and was originally planned as his English Language debut with Meryl Streep pegged for the the central role. However, the director grew uncomfortable with the idea of writing and filming in English and so the film eventually became as Spanish language project.

Dramatisation of the epic undertaking to evacuate over 300,000 members of the British and Allied forces from the beaches at Dunkirk in the face of certain destruction from advancing German troops and aerial bombardment.

Not the Christopher Nolan time mashup from 2017 but the 1958 version directed by Barry Norman’s dad, Leslie which focuses on John Mills’s corporal as he attempts to get his five man squad to the beaches in time after blowing up a bridge further inland.

It was the third most popular movie at the UK Box Office in 1958 after Bridge on The River Kwai and The Vikings.

Hopefully, there’s something that appeals here, whether it’s an older classic you’ve always wanted to catch but never had the chance or a less successful Box Office performer given a second chance.

Movies leaving the BBC iPlayer by the end of July 2020