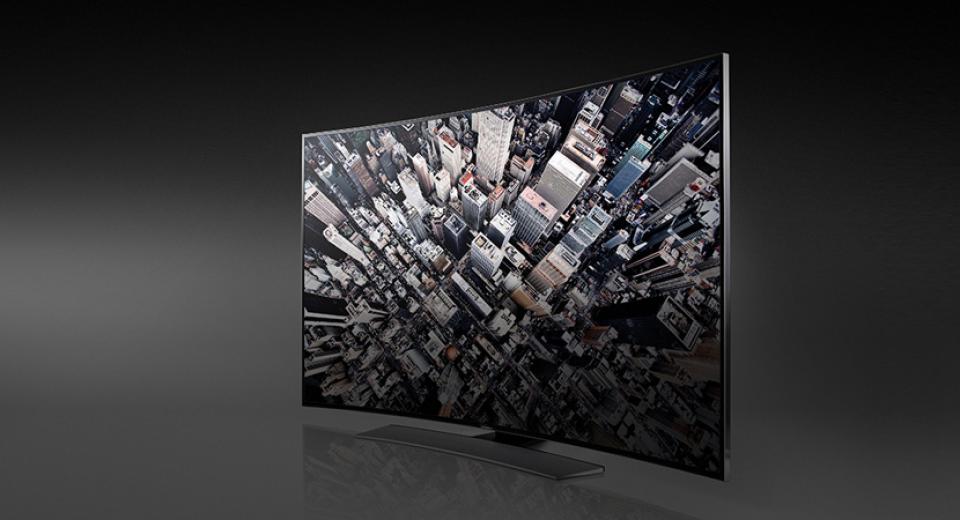 If you've been looking at TVs in your local store recently, you'll probably have noticed that quite a few of them are curved.
Whether the TV uses an LED LCD or OLED panel and no matter that the resolution is Full HD or Ultra HD 4K, curved screens are currently flavour of the month. It all started in late 2013 when Samsung and LG launched their first large screen OLED TVs to the market. Both the Samsung KE55S9C and LG's 55EA980 used curved screens, although at the time it didn't seem as though there had been a seismic shift in the TV landscape. An OLED panel is much thinner and far more flexible than an LCD panel, so curving an OLED screen was relatively straightforward. Curving their new OLED TVs made sense to both Samsung and LG because they stood out from the competition and drew attention to the new display technology.

However by the time we reached CES 2014 the industry, led by Samsung, was throwing the consumer a curved ball and bendy screens were everywhere. Fast forward to IFA 2014 and pretty much every TV manufacturer had at least one curved screen in their line-up. Samsung have been the biggest proponents but given their position as the world's biggest TV manufacturer it was inevitable that they would influence everyone else. LG, Sony, Toshiba, Philips and Finlux have all added TV ranges and even the Chinese manufacturers have jumped on board. But is the dreaded 'c' word a good idea or a marketing gimmick? Does the curve improve the viewer's experience or is it largely cosmetic? Well since Samsung have been the main cheerleaders for curved screens, we'll let them state the case for the defence. Aside from the aesthetic nature of a curved screen, which is evident to anyone who sees one, Samsung also believe the shape improves the viewer's experience. This, they say, is due to the morphological characteristics of objects as seen through the human eye or, in other words, how we see objects on a screen. By curving the screen, the distance from the screen to the eyes is consistent across the entire screen, when watching from the centre. From this vantage point it also creates a wider field of view, making the screen appear larger. Of course not everyone will be able to watch TV whilst sat directly opposite the centre of the screen; If there's more than one person in the household, then they will have to watch at an angle.
Samsung have been the main cheerleader for curved screens and feel they offer numerous advantages.
Samsung believe that using a curved screen also helps these viewers too, by improving the viewing angles because the far end of the screen is facing the viewer more than with a flat screen. Samsung also believe that the contrast performance of the LCD panel is improved because of the curved screen and the manufacturer employs other technology such as area based contrast enhancement to create a sense of depth and optimise the viewing experience. In fact Samsung claim they have conducted extensive research to optimise the curvature itself, the technology inside the TV and even their production facilities to deliver the best possible experience to the consumer. They also point out that the curve is effective at minimising the effects of ambient light in the room, although in testing we have noticed that any light opposite the curved screen can result in annoying reflections.

The other big selling point of curved screens is the greater sense of immersion that the experience creates. This is true to a degree but it very much depends on the size of the screen. The usual example used to justify the immersive nature of curved TV screens is that of curved cinema screens but that is slightly misleading. For a start, curved cinema screens are often 50 to 100 feet wide, and go to the edge of the auditorium walls, so clearly that will have a more immersive effect. It's hard to believe that watching a 55-inch TV from 10 feet away will have anything like the same sense of immersion.

In addition, cinema screens were often curved to allow for the distortion caused by anamorphic lenses, something that doesn't apply at all to televisions. However it is fair to say that the bigger the curved screen and the closer you sit, the more immersive the experience feels. The final area where curved screens can add value is 3D, where the inherent sense of depth that the curve creates is amplified by the 3D, resulting in a genuinely immersive experience. Once again size matters, as will viewing distance, but the experience can be very enjoyable.
The rest of the industry has followed Samsung's lead but more out of a desire to offer consumer choice.
So if that is the case for curved screens, what is the case against them? There are those who inherently like the shape of a curved TV and the experience it creates and those who find it annoying. It's certainly true that a straight line on screen (such as the black bars at the top and bottom of a widescreen movie) does appear curved, drawing attention to itself. However when we have been testing curved TVs we have often noticed that you quickly adjust to the shape and after a few days you don't even notice. Whilst Samsung have been almost evangelical in their promotion of curved screens, especially in relation to Ultra HD 4K, the other manufacturers appear slightly less enthusiastic. In fact when asked why they were introducing a curved TV into their range, TP Vision/Philips said it was purely to offer customers a choice.

Samsung would certainly like us to believe that curved screens are the future of television, and perhaps they are, but for the moment the jury remains out. There's no doubt that the consumer response has been positive and where Samsung goes the rest of the market is sure to follow. However are curved TVs better than flat ones? The honest answer is that it depends. Many of the benefits that Samsung state are true but there are downsides as well; although there's no denying the immersive nature of the curve on particularly large screen sizes. Since average screen sizes are increasing and Ultra HD 4K makes more sense on a big screen, perhaps Samsung have a point. Here at AVForums we're largely agnostic when it comes to curved screens and ultimately it will depend on individual preference.
To comment on what you've read here, click the Discussion tab and post a reply.
Article Discussion (121)