Double Fine opens its doors and lets you in to watch as their annual Game Jam unfolds. 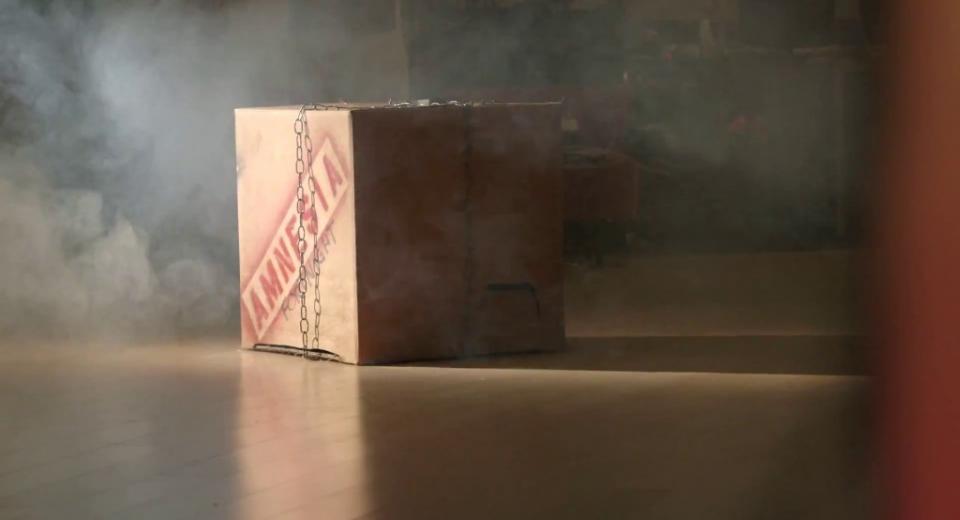 Amnesia Fortnight 2014 PC Game (2014)
Double Fine, the colourful force behind Psychonauts, Stacking, and Broken Age, have just wrapped up their Amnesia Fortnight. Every year for two weeks all scheduled work within the studio comes to a shuddering halt and focus instead turns on the staff. During this period the production hierarchy is effectively disbanded as every employee is encouraged to pitch and potentially even lead their own game prototype. Be they an intern or a senior engineer, roles and rank mean nothing and it’s your creativity that defines your success.

The event is relatively unique in the professional games industry and with every passing year it draws more and more attention. Its roots stem from lengthy development of Brutal Legend which, according to studio head Tim Schafer, was a tough period for him and his team. Thanks to a series of publisher disputes brought about by Activision’s merger with Vivendi Games, the game’s future was in doubt. Uncertainty hung over the place and it did morale no favours. However, rather than force his team to continue the slog unabated, Schafer chose instead to shelve their troubles and boosted spirits by unleashing their artistic freedom, allowing them to make whatever they wanted.

Though somewhat of a busman’s holiday, the staff jumped at the chance to forge something of their own. No matter how professional you are, if you work on the same thing for an extended period of time you crave a fresh challenge, and if you get to choose what it is then so much the better. Thus for a fortnight the leather jackets and rock albums were put to one side and in their place appeared sneaky ninjas and tanks with legs. By all accounts the concept was a success. Not only did the staff get a break from the pressures of shipping a huge game but they got to flex their own creative muscles. In fact it proved such a success that come the end of Brutal Legend in 2009 it bore substantial fruit. With a sequel canned and searching for potential new projects, Schafer turned to the now burgeoning crop of prototypes. Costume Quest released the next year, whilst the following twelve months saw Stacking, Iron Brigade, and Once Upon a Monster all make the leap to fully realised titles. All as different as can be and all made possible thanks to the nurturing atmosphere of Double Fine.

With the popularity of Amnesia Fortnight growing, Double Fine runs things a little differently nowadays. Rather than deciding internally what they should explore, they’ve opened it out to the democracy of the Internet. Working with the Humble Bundle group, the excited public watched pitches from twenty-three of the dev team before voting and whittling them down to just four. And as is almost traditional now, you couldn’t get a more disparate bunch.

There’s Mnemonic, a noir adventure game based on amnesia and blurry memories wrapped around a point-and-click. Steed, where instead of you playing as a hero on horseback you play as a horse with a hero on his back. The grim Dear Leader puts you in the shoes of a dictator trying to keep control of a country on the brink of revolution. And finally, the odd Little Pink Best Buds where guest designer Pendleton Ward (creator of Adventure Time) has chosen to drop you in a field surrounded by tiny pink people clamouring to be your friend. It’s delightful just how different each of them are. Not merely in terms of gameplay but also in tone. Little Pink Best Buds verges on the surreal, as you may expect from the mind behind a weird children’s TV show, whilst Dear Leader was pitched by a woman with ties to Russia, leading to some sombre truths hidden within its take on an oppressive regime. It’s remarkable how the community has gotten behind such a diverse selection. They’re not all the outlandish humour usually associated with Double Fine, colourful and full of whimsy, which goes to reinforce how talented the studio is at turning their hand to such a range of genres whilst still keeping the confidence of their fan base. It’s a rare talent.

Double Fine appreciate the support too and have proven incredibly proactive in broadcasting their endeavours as they happen. With daily YouTube shows and a constant Twitch stream there’s no shying away from the world for these prototypes. The stuttering starts were there for all to see, but so to were the glorious moments as traction was found and all involved gained some precious momentum; we saw the troubling second week as they realised time was running out and something had to be cut, but then we also witnessed the triumphant final push to create a build worthy of release. It’s been reality TV for games development and it’s been superb.
The outlandish humour usually associated with Double Fine, is replaced by a range of genres whilst retaining the confidence of their fan base.
Usually popping a camera crew in a game developer and telling them to document the process would result in tedium. As exciting as making games sound they often move at the pace of glaciers, taking years to get anywhere. Within that period there are often bursts of excitement around the initial prototyping or come the end where bugs are rife and the stakes high, but in the middle there’s an awful lot of, well, work. Seeing anyone sat at a desk all day writing the finer points of a system to detect whether you’ve pulled the network cable out of your console at the wrong point is definitely not prime time viewing.

In a microcosm what Double Fine have produced is an engrossing series about game development. Condensed into the space of just two weeks are the stresses and strains that accompany projects of all sizes, both creative and technical. With very candid staff they talk through their thoughts on the evolution of the initial pitches and in reasonable depth about complex technical problems. There’s no dumbing down here – though on screen captions do help sift through the jargon – and if that day’s big topic is how the graphics engineer needs to optimise for a volumetric light then it will be covered. No doubt the odd awkward moment was left on the cutting room floor but what remains should be of interest to anyone wanting to see behind the curtain. This is development with the shiny veneer of PR removed.

For as much as vidocs or the odd frank interview with any number of project leads may appear to give an air of openness to some studios, there can be an emptiness to the sentiment. Consumers can sense it’s an advert. It’s unusual if they are anything but highly polished and well managed, the men in charge ensuring that everyone is on message and towing the company line. Quite right, too, given the large sums invested; it’s a small price to pay for the continued backing of triple-A games and, on the flip side, a secure job. These are not the best places to see how games are made. Away from the platform holders and big publishers the philosophy is somewhat different. Many of those involved in this portion of the industry have far less to invest in advertising and PR, opting instead for a different tack: openness. Their blogs and Twitter feeds are permanently full of tales of progress, proudly announcing that they’ve cracked exciting new aspects of their game, or advertising their presence at events like Rezzed where they will be more than happy to show off their latest build and talk with you. Getting their development story out there is their way of getting you engrossed in their game.

Double Fine may not be a struggling indie dev jobbing it at shows, but the principle still stands true. Being open and showing us how they work and how they create is endearing. They are letting you in, giving you a snapshot of their lives in development, and it’s hard not to warm to them.

So next time you sit down on the sofa and begin browsing Netflix, wait. Head instead to Double Fine’s YouTube channel and treat yourself to a boxed set of Amnesia Fortnight.