A winning combination that has you hooked from the very beginning 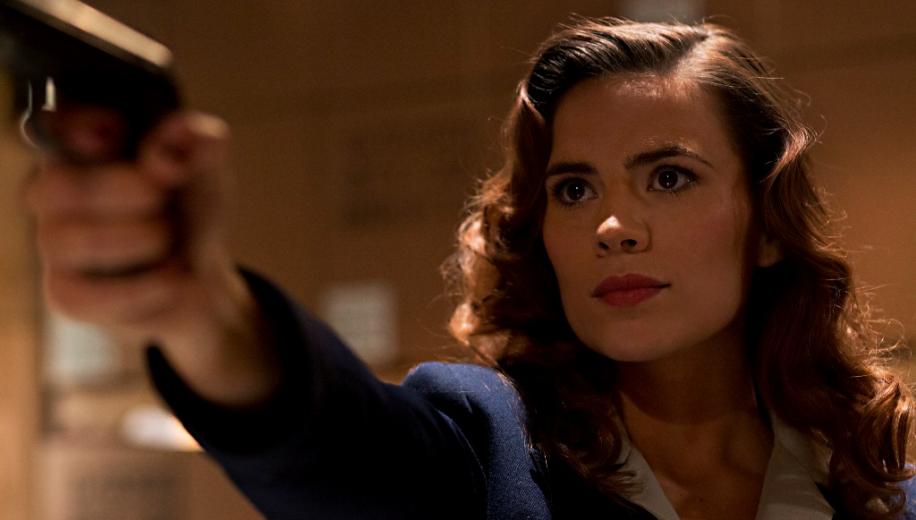 Agent Carter Season 1 Blu-ray (2015)
SRP: £28.00
We will be covering the UK steelbook release of Agent Carter upon its release, but in the meantime we will take a look at the (bound-to-be-identical) US release which hit the shelves two months earlier.
We first met Agent Peggy Carter in Marvel’s Captain America: The First Avenger where she and Steve Rogers formed a very close relationship. Set during the Second World War, Ms Carter was an anomaly in a man’s world; straight, forthright and every bit as capable as her male counterparts; she became an indispensable part of the team. However, after Rogers plunged the Hydra craft into the ice and the war came to an end, she found herself working for the Strategic Scientific Reserve, where her talents are completely wasted and she is treated as little more than a secretary. That is until Howard Stark seeks her help in disproving the accusations of treason against him; teaming up with his butler, Jarvis, the pair from an unlikely crime busting alliance as Peggy tries to keep one step ahead of the SSR, criminals, assassins and the mysterious Leviathan…

The first season of Agent Carter runs at only eight episodes, and it is due to its limited run that the whole season works so well. Unlike, say, The Flash (23 episodes), which took a while to find its feet and get going, Agent Carter hits the ground running and barely lets up until its thrilling climax. To the creative team’s credit each episode is strong, there is a clear narrative running throughout the series, the characters are well defined and likeable and the chemistry that Hayley Atwell brings to the lead is outstanding. Even though there are outlandish ideas (Stark’s weaponry for example) juxtaposing them with the reality of a single woman in a male dominated workplace, adds a dose of natural comedy. There are also realistic fight scenes where a female protagonist can take down a much more powerful male adversary and the result is a winning combination that has you hooked from the very beginning.

That is really saying something, considering we know her eventual fate from Captain America: The Winter Soldier, the creators have been very clever by adding peril to situations by revealing Peggy’s vulnerability towards those closest to her who, in a rare case for a Marvel series and a TV show, characters don’t always make it to the end credits! The US set comprises of two discs in one case and the first pressing has a slip case. The picture, as you would expect from an all-digital source, is stunning; the colour scheme pushes earthy hues, but this allows some terrific brightness from the primaries, Peggy’s signature red hat, for example. The detail on show is stunning, from close up skin texture to the just-after-the-war New York skyline. Black level is terrific and really adds significant depth to the frame. There's (very) occasional bouts of banding (say when highlighting faces in a dark alleyway when the frame depth flatten out) but all other artefacts are absent.

The English DTS-HD MA 5.1 sound track is another winner with the surround speakers being in near constant use to fill out ambiance placing you in the centre of the action (and there is plenty of action). Bass is stunning, adding significance to explosions and gun shots, but also to the score – check out the sub during the opening credits!
Stunning picture and sound but disappointing extras

Disappointingly the only extras are a two and a half minute selection of bloopers and this, combined with the lack of a ‘play all’ button for the episodes (i.e. you have to select every episode individually to play them), the single surround track (only other is English 2.0) and just English subtitles, does give the disc a rushed-to-the-shops feel.

Overall, though, the series itself makes the set. The US one has arrived earlier than the UK release, but importing it will cost more money (it is Region free) and bearing in mind the above paragraph, the cost may outweigh the value of the set; having said that, if you can’t wait then this is the way to go – a blind buy (as I was) won’t disappoint! If, however, you can hang on and want to save a few quid the UK disc is coming on 30th November.

The Director's Cut of Nightbreed - What is all the fuss about?
H
Is 4K Netflix better than Blu-ray?

Nosferatu - Delving deep into the horror

The Howling - A look back