A Guide to Dolby Atmos in the Home

Prepare to be truly immersed in sound 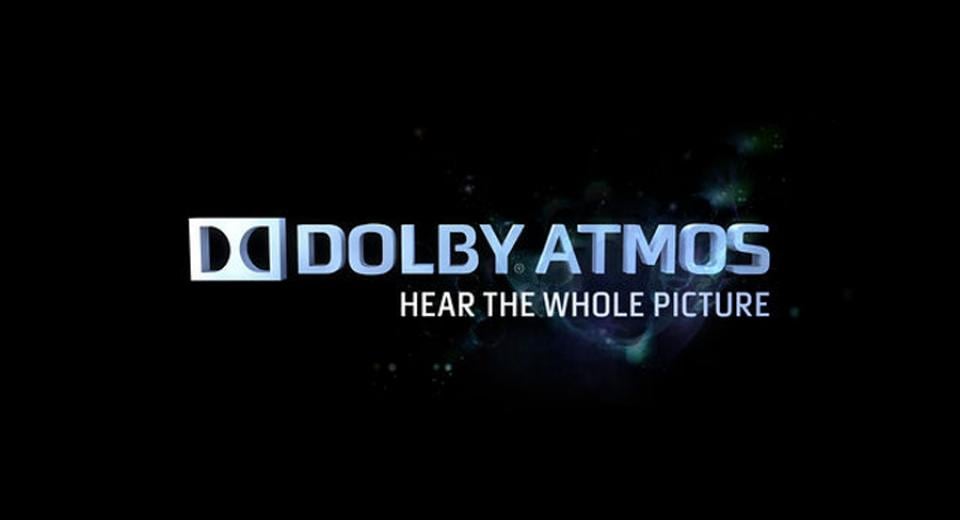 You may have seen the coverage of Dolby Atmos recently and wondered what all the fuss was about?
Well we're here to help, with our guide to everything you needed to know about Dolby Atmos but were afraid to ask!

What is Dolby Atmos?

Atmos is an entirely new audio system developed by Dolby, that fundamentally changes the way sound is designed for films and presented in the cinema. Atmos uses an object based approach to sound design, rather than just channels, which Dolby feels gives filmmakers greater creative freedom in terms of surrounding the audience.

To help deliver this vision, Atmos equipped cinemas have side speakers that start from the edge of the screen and go all around the auditorium, additional subwoofers and two speaker arrays going directly overhead. Since its launch Atmos has been installed on over 650 screens in 40 countries, including 9 screens in the UK, and 120 films have been made with Dolby Atmos soundtracks, including Gravity, Godzilla and X-Men: Days of Future Past.

We covered the digital release of the last film in that list in detail in our article Digital Cinema: Deluxe, Dolby and Days of Future Past

If you're interested in knowing more about the history of Dolby, you can read about our article Dolby - Making films sound better for over 40 years

For a more detailed explanation of Dolby Atmos in the cinema, you can read our in-depth article Dolby Atmos - Giving film soundtracks a new objective

Atmos is Dolby's new 'object-based' sound system that has been developed for both the cinema and the home. How is Atmos different than typical channel-based home cinema systems?

Atmos is the first home cinema system that is based not on channels, but on audio objects. What is an audio object? Any sound heard in a movie scene - a helicopter taking off, for example - is an audio object. Filmmakers using Dolby Atmos can decide exactly where the sound of this helicopter should originate and precisely where it should move as the scene develops. Thinking about sound in this way eliminates many of the limitations of channel-based audio. In a channel-based system, filmmakers have to think about the speaker setup - should the sound of the helicopter come from the left rear surrounds or the left side surrounds? With Atmos, filmmakers just have to think about the story and simply where is the helicopter going within the dimensional space of the film itself?

The Dolby Atmos system, whether in the cinema or in the home, is designed to determine what speakers to use to precisely recreate the helicopter’s movement in the way the filmmakers intend. As a result Atmos is also far more flexible and adaptable than channel-based home cinema systems. In a channel-based system with channel-based content, the number of speakers is fixed - a 7.1 system always consists of seven speakers and one subwoofer. In contrast, Atmos provides greater flexibility - you can get the full experience with just seven speakers or get an even richer, more detailed sound by adding more speakers. As you add speakers, a Dolby Atmos enabled receiver will automatically determine how to use them to create the most immersive sound field.

If Dolby Atmos allows me to add more speakers, why do I see AV receivers with just 9 channels?

Many of Dolby's hardware partners are building or planning to build Atmos enabled A/V receivers and speakers. It is obviously up to those partners to decide what product configurations make the most sense for their customers. But the Atmos system itself is almost unlimited. If you have the space and budget, you can build an Atmos system with as many as 24 speakers on the floor and 10 overhead speakers and some of Dolby's partners are planning on releasing products that support up to 32 channels. How will Dolby Atmos be delivered in the home?

In the home, Dolby Atmos will be delivered via suitably equipped AV processors and receivers. So far almost all the major manufacturers of AV receivers have announced support for Atmos, with Onkyo, Denon, Pioneer and Yamaha lining up Atmos capable models for the autumn. All of these new receivers will offer Dolby Atmos decoding, either out-of-the-box or via a firmware upgrade, although which particular configuration will depend on the outputs and on-board channels of amplification on the receiver itself. However, with prices ranging from £1,399 to £2,199 there should be a Dolby Atmos capable receiver to suit all pockets.

In the case of Onkyo their Atmos enabled models are the TX-NR1030, TX-NR3030 network AV receivers, and the PR-SC5530 Network AV Controller, which are set to launch Stateside in August. The TX-NR1030 supports up to 9 channels while both the TX-NR3030 and PR-SC5530 support up to 11 channels of audio. Other Onkyo products which will feature Atmos include the HT-S7700 and HT-S9700THX all-in-one systems, along with the SKS-HT693 and SKH-410 speaker packages. It has also been reported that current models such as the TX-NR636, TX-NR737 and TX-NR838 will be Atmos enabled via a firmware update.

Not to be outdone, Denon will be launching the AVR-X4100W and AVR-X5200W in September both of which will support Atmos and have the processing power to run a 9 channel configuration. Pioneer will also be joining the Atmos party in Sptember, with the launch of the SC-LX88, SC-LX78 and SC-LX58, all of which are 9 channel designs and Atmos capable. Finally Yamaha announced that they will be releasing the RX-A3040 and RX-A2040 in September and both of these receivers will support Atmos out-of-the-box. As far as processors go, they only Atmos enabled one announced so far is the Trinnov Audio Altitude 32, which offers a staggering 32 channels for a full Atmos cinema setup at home!

Atmos is very flexible allowing you to go from a 9-channel configuration up to one that uses a whopping 32 channels! Do I need more speakers?

The short answer is yes. One of the main attributes of Dolby Atmos is that it uses overhead speakers, so in order to achieve the desired affect you will need to add at least two speakers to the ceiling. For the full Atmos configuration you will need four but the good news is that you don't need to hang big bookshelf speakers over your head. The smaller speakers that form part of a sub-sat system would be ideal for overhead speakers. They don't weigh too much, usually include wall mounts, should be easy to fit and remain 'relatively' unobtrusive. Whether you need to use two or four will depend on the Atmos configuration you choose and ultimately how many channels of amplification your new receiver has but, aside from some cable management, it's certainly feasible to add overhead speakers.

Feasible but not necessarily desirable, especially where partners are concerned. It can often be hard enough to convince your better half that you need five or seven speakers in the lounge, let along four more on the ceiling. It's fair to assume that the addition of overhead speakers is better suited to a dedicated home cinema and any husband hanging speakers from the ceiling is likely to find himself in the dog house fairly quickly. Dolby and their partners realise this and have developed a compromise, which they have christened Atmos-enabled speakers.

These speakers will replace your existing front and rear speakers and have built-in upward firing drivers to bounce the overhead channels off the ceiling to create the effect of overhead speakers without resorting to the stepladder and drill. Of course such a solution won't be as good as actual overhead speakers but it's a tidier solution that's less likely to end in divorce. If you don't want to replace your existing speakers, and we're sure many of you won't, there is also the option of Dolby Atmos-enabled speaker modules. These are designed to complement your existing speakers, you simply place the modules right on top of them.

If Atmos is not a channel-based system, why are there predefined speaker positions?

Dolby has decided that because Atmos is new to the domestic market, there will initially be a few defined “reference” speaker configurations to ensure that early customers have the best experience possible, whilst retaining the option to keep most of the equipment they already have. Among those initially defined setups are the 5.1.2 configuration, which involves adding two ceiling or Dolby Atmos enabled speakers to a traditional 5.1 system, and the 7.1.4 configuration, which starts with a traditional 7.1 system and adds four ceiling or Dolby Atmos enabled speakers. Of course, this is just the beginning and because Atmos is object-based there will be the opportunity to add many other speaker configurations later. In fact the Trinnov Audio Altitude 32 processor mentioned earlier already offers Atmos with up to 32 channels. Where should I put my new speakers?

So you've got your Atmos capable receiver and your overhead speakers or special Atmos speakers, what next? Well you need to decide which Atmos configuration is best for you. This is undoubtedly going to depend on practical considerations such as space and the number of channels of amplification that your receiver has built in.

It would appear that Dolby Atmos is backwards compatible and so can be delivered on Blu-ray and through video streaming services. Dolby claim they have developed new scalable algorithms and extensions to Dolby TrueHD, for Blu-ray, and Dolby Digital Plus, for the leading streaming video providers. Both formats now support Dolby Atmos sound, meaning that you’ll be able to play Atmos movies from your Blu-ray player or through your favorite streaming services. And with 120 films already mixed in Dolby Atmos and more on the way, there shouldn't be a shortage of Atmos content to play on your new system.

Will I have to replace my Blu-ray player or HDMI cables?

No, any Blu-ray player that fully conforms to the Blu-ray specification can play a Dolby Atmos movie without a firmware update. Just remember to set your player to audio bitsteam output mode. There’s also no need to buy new HDMI cables because the current HDMI spec fully supports Dolby Atmos audio.

What if I build an Atmos system but want to play content that isn’t in Atmos?

Don't worry, your new Dolby Atmos capable receiver or processor will still support all the other formats that are currently available, so you can still play stereo, 5.1, or 7.1 content on your new system. Although you will also have the option to use Dolby's Atmos technology to automatically adapt any channel-based signal to use the full capabilities of your new system, including your overhead speakers, ensuring that you hear the most immersive sound possible.

It certainly sounds very exciting and I'm currently adding four overhead speakers to my home cinema so that when the new Dolby Atmos capable receivers are released, I'll be able to provide you with an in-depth review of both the receivers themselves and Dolby Atmos.

So what do you think? Are you also excited at the prospect of a new sound format? Are you planning to add overhead speakers to your home cinema or do you prefer the idea of upward firing speakers as a more realistic alternative? Please let us know in the thread below.